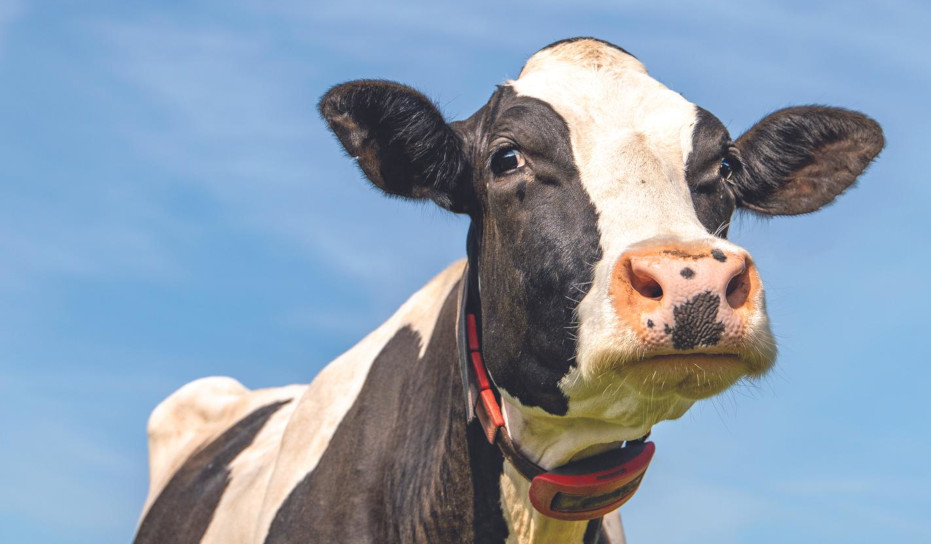 Under the hood, the GPS-enabled real-time location sytems (RTLS) are quite simple, made up of just a few components. Inside, they feature GPS receiver, used to locate the asset using radio signals transmitted by orbiting global navigation satellite system (GNSS) satellites. They also include a wireless modem – often for 2G, 3G, or 4G LTE cellular communication – used to channel data to and from the cloud. Each of these is connected to a dedicated antenna that receives and transmits the required wireless signals.

And finally, they contain one more component that is responsible for the lion’s share of the device’s size and weight: the battery. There’s a reason why the battery is so large: compared with the energy used for occasional data transfers the asset trackers carry out, for example over low power wide area cellular networks (LTE-M or NB-IoT), satellite-based positioning can be – dare we say it? – well, a bit of a power hog.

A standard GNSS receiver that continuously tracks its location can drain even a generously proportioned battery pack in just a few days. Using a series of hardware and firmware-based tweaks to optimize the balance between tracking performance and power consumption, the battery longevity can be extended considerably.

For typical use cases in size-constrained applications, including sports watches, pet and people trackers, and handheld devices that can be recharged on a daily or weekly basis, these tweaks provide sufficient longevity to make the solutions attractive to customers.

But other use cases, particularly small industrial asset trackers, simply need more juice. In industrial asset tracking applications, managing a large fleet of GPS-enabled asset tags to keep tabs on parcels, boxes, roll cages, livestock, and across vast supply chains may only become viable if maintenance efforts, largely focused on keeping the trackers powered up, are kept to a minimum.

We’ve already written about hardware- and firmware-based approaches to reduce a GNSS receiver’s power consumption on this blog. We’ve also put together a white paper presenting strategies for designing ultra-low-power GPS solutions for the IoT. In this blog, we focus on one of the strategies we briefly touched on in the white paper. It’s the approach that goes furthest in extending the mileage you can get out of GPS-enabled IoT asset tracking solutions, namely cloud-based positioning.

First, what is cloud-based positioning? In “typical” satellite-based positioning, each step in the positioning process happens in the GNSS receiver itself – satellite signal acquisition and data download, the pseudorange calculation (yielding the estimated distance to the orbiting satellites based on the available data) to each satellite, and the final position fix. Cloud-based positioning splits up the task into two steps, resulting in exponential improvements in power consumption.

With our u-blox cloud-based positioning solution, step one, which includes everything up to (and including) the pseudorange calculation, still takes place on the GNSS receiver. Step two, the position calculation, takes place in the cloud, based on the pseudoranges, which are transferred to the cloud at the end of step one using any available form of wireless communication (including 4G LTE, Wi-Fi, Bluetooth, or even proprietary technologies) is relegated to the cloud. 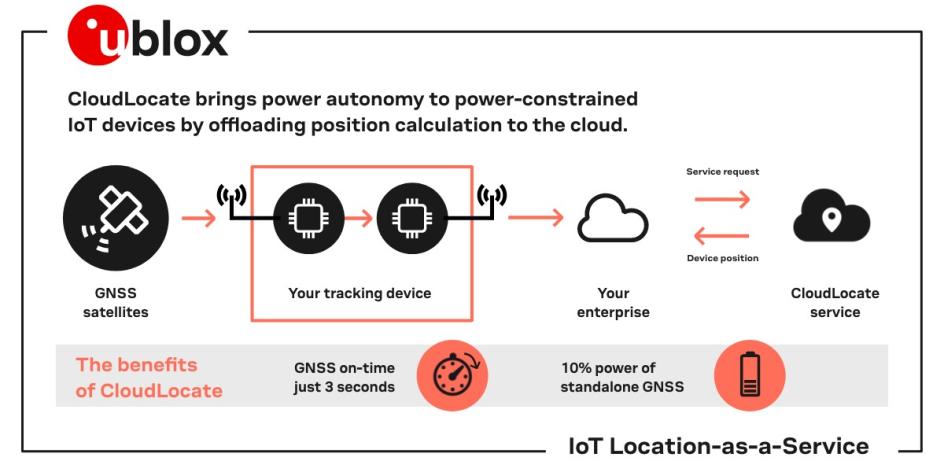 Using CloudLocate, which is what we call our implementation of cloud-based positioning, the GNSS receiver only needs to be switched on for three seconds in good signal conditions to achieve a positioning accuracy of under 10 meters, which is more than enough for most common industrial asset tracking applications. The position is calculated in the cloud and not on the device itself. As a result, the device never finds out its own position. Fortunately, this is perfectly aligned with the way asset tracking platforms are designed.

Without having to retrieve GNSS aiding data, CloudLocate resolves the position of tracked assets in the cloud using a 12-50 byte data upload. The small size of the data package, achieved by preprocessing the GNSS signals on the GNSS receiver, makes the solution well-adapted for bandwidth-constrained protocols and networks and keeps associated data transfer costs low. Best of all, by reducing the power demand of the GNSS receiver up to 90 percent (for six position updates per day), CloudLocate can increase the battery life of a tracking solution fourfold (or much more if fewer daily position updates are required).

CloudLocate offers a new degree of flexibility, expanding the scope of industrial asset tracking solutions. Because of the way we implemented the service, CloudLocate can aggregate data from other positioning technologies in addition to satellite-based positioning. Cellular network fingerprinting (which we have implemented as CellLocate), Wi-Fi sniffing, or Bluetooth indoor positioning, all offer location information when the tracker is beyond the reach of GNSS signals.

To find out if CloudLocate is the right service for your application, head over to our on-demand webinar, in which we show how positioning in the cloud can help you strike the optimal balance between battery life, position accuracy, and update rate. The webinar also covers the basics behind the technology and explores some use cases that stand to benefit from it. And to go deeper, reach out to our sales team or fill out a project information form and let us know what you are working on. We’ll get back to you as quickly as possible.

Until then, stay tuned for the next blog in our series, which will focus on tracking assets at rest, both indoors and outdoors. 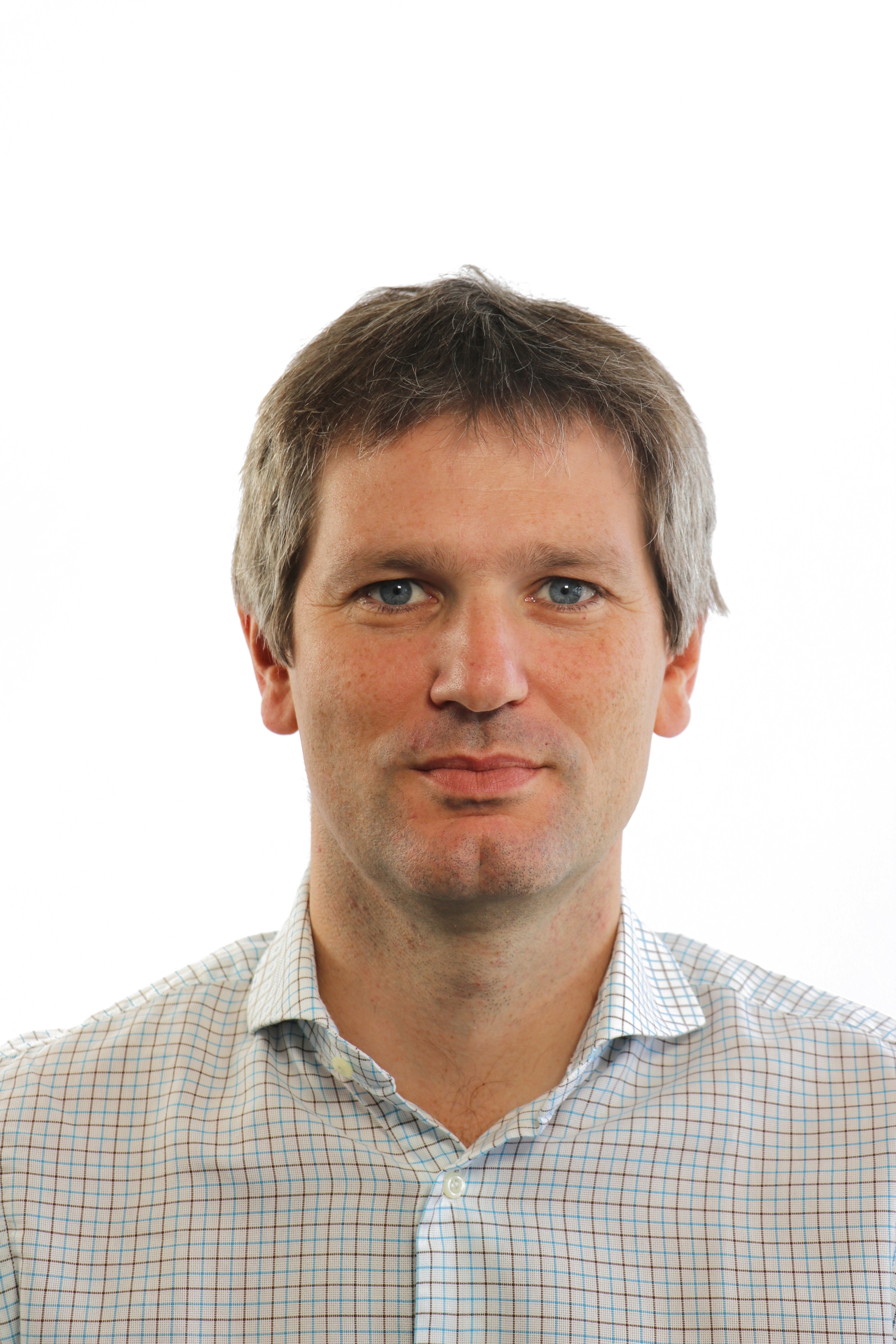