In the Americas, growth continued as in the year before and achieved a 19% business expansion. The improved macro-economic climate created greater demand for our customers’ products and hence for our own. u-blox recorded an encouraging rise in market share and increased volumes with new customers. Interest in the company’s new products and technologies was keen and provides a solid foundation for future operations.

In Europe, the Middle East and Africa (EMEA), results were strong despite economic progress remaining hesitant in some countries and impacting our own operations. Nevertheless, u-blox expanded its business in countries with healthy export markets and reported strong growth in automotive and industrial applications, leading to revenue growth of 20%. There was also a surge in new business opportunities.

Growth in the Asia-Pacific (APAC) region reflected its vibrant economic climate and laid the foundations for further consolidation of our market share. u-blox increased sales with existing customers and acquired several important new accounts, both factors that led to significant manufacturing ramp-ups for specific products.     u-blox’ ongoing innovation and the delivery of new products continued to attract customers. Revenues grew strongly in all application areas, and the overall increase stood at 27%.

The company’s product and service business segments both generated positive EBIT in 2014. Consolidated revenues increased by CHF 50 million to CHF 270 million while EBIT rose from CHF 30 million to CHF 39 million, a 30% increase over 2013. Net profit grew by 40% to CHF 34 million, the equivalent of a 13% net profit margin.

In 2014, as in previous years, u-blox’ expansion, acquisition, manufacturing and product strategies were geared to achieving the target of achieving half-billion-dollar annual revenues in the foreseeable future. The company took a major step towards that goal by establishing the third pillar in its product offering: short range radio connectivity.

Two acquisitions made during the year have given u-blox the technologies, expertise and products to maintain its market lead and further widen our technology base. These were:

u-blox has successfully integrated all employees in the companies acquired, significantly increasing its workforce and giving it two new R&D centers. Thanks to the acquisitions, u-blox is now able to supply a product range that covers the entire connectivity spectrum for customers worldwide.

During the year under review, u-blox also introduced a new product-grade concept – Automotive, Professional and Standard. The concept facilitates the matching of modules or chips with customers’ designs and gears our product range even more closely to customer needs.

u-blox launched a raft of new products in 2014, all designed to incorporate state-of-the-art advances in technology, to meet its customers wide-ranging and ever-changing needs and to keep the company at the forefront of the industry. In the positioning sector they included the eighth generation of MAX, NEO and LEA GNSS modules, a 3D Automotive Dead Reckoning, a GNSS antenna module that supports all satellite types and GNSS precision-timing modules as well as the world’s smallest standalone positioning module. On the cellular front, u-blox rolled out the fastest 4G module (TOBY-L2) available and a new line of ultra-compact LTE cards (MPCI-L2). Finally, in the short range sector, which completes the connectivity line-up, the company introduced a rugged Wi-Fi and Bluetooth module for demanding industrial, automotive, medical and security applications. This strengthens the company’s position in the next big market to come: the Internet of Things (IoT).

The Internet of Things will provide interconnectivity across the board and is poised to become the biggest growth area of the near future. The years ahead will see the connection of dozens of billions of devices to the worldwide web. From satellite-based positioning, through cellular communications and on to short range Wi-Fi and Bluetooth radio technologies, u-blox supplies the building blocks that make the Internet of Things possible and are ideally positioned to profit from the steep growth inevitable in this sector.

In 2014, the company made about 80% of its total revenue from 69 customers. u-blox’ largest customer accounted for less than 7% of revenue. u-blox served over 5’000 customers and achieved global expansion into new regions and markets.

With the acquisition of Malmö-based connectBlue AB and Athens-based Antcor S.A., u-blox opened the door to the market for short range, Bluetooth/Wi-Fi based radio communications. Adding short range products enables u-blox to meet the whole range of customer requirements. 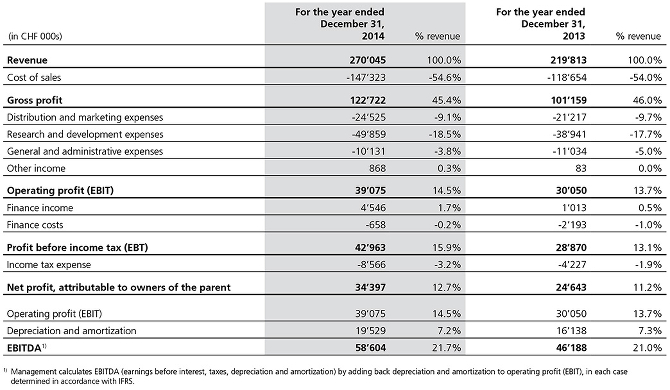 In 2014, u-blox generated cash from operating activities in the amount of CHF 53.7 million as compared to CHF 38.5 million in 2013. Inventory level has increased due to the expansion of the business and due to higher revenue.

Main investing activities
Investments in capitalized development costs were CHF 20.7 million as compared to CHF 14.9 million in 2013. CHF 7.0 million was invested in furniture, equipment, tools and test infrastructure for the further expansion of capacity along with approximately CHF 6.0 million in software intellectual property rights and acquired technology.

u-blox made a dividend payment of CHF 8.5 million and received proceeds from the issuance of ordinary shares connected with the employee share option plan of CHF 5.6 million. In connection with the acquisitions in short range radio, u-blox took a short-term bank loan for cash optimization of CHF 20.0 million.

Due to this strong financial position and the positive outlook, the Board of Directors proposes at the Annual General Meeting to pay out dividends. For this year an increased dividend of CHF 1.60 per share is suggested, which represents a payout ratio of 30.6% of consolidated net profit, attributable to owners of the parent. 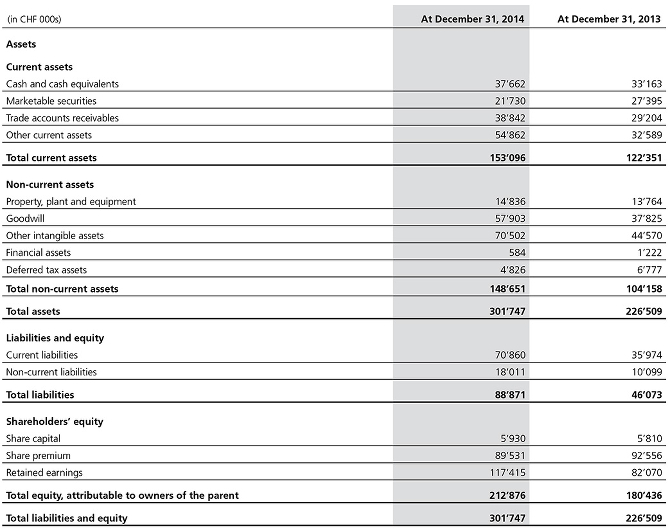 Risk is an inherent factor in any business or operation, and many of our customers face ongoing uncertainty. As entrepreneurs, we can take active steps in areas that are under our control to decrease the impact of risk from global, regional or national financial crises. First, we ensure that the quality of our products is second to none and that they meet our customers’ needs. Second, we look for a natural hedge against currency exchange movements, with production cost and operational cost matching our income currencies. And third, we have a wide and ever increasing customer base, with no single customer out of a total of 5’000 accounting for more than 7% of our sales.

The growing demand for internet connectivity and the billions of devices that make it a reality have generated a wealth of products and services that serve every sector of the global economy, from fleet management and asset tracking through navigation and payment solutions, to consumer devices such as toys, watches and locators. And this is just the beginning. u-blox produces and markets a comprehensive range of devices that make high-speed connectivity and access to virtually unlimited cloud computing a reality. With a growing portfolio of embedded chips and modules, u-blox is perfectly positioned to garner the financial and market benefits of the Internet of Things that really matter. And with an ever-increasing customer base, u-blox has laid the foundations for ongoing success. For 2015, u-blox anticipates EBIT of between CHF 48 million and CHF 53 million, based on revenues of between CHF 335 million and CHF 345 million. These expectations exclude unforeseen economic adversity and foresee budgeted exchange rates (USD/CHF: 0.974; EUR/CHF: 1.065).

At the General Assembly the Board intends to propose re-election of each board member with the exception of Hans-Ulrich Müller and election of André Müller.