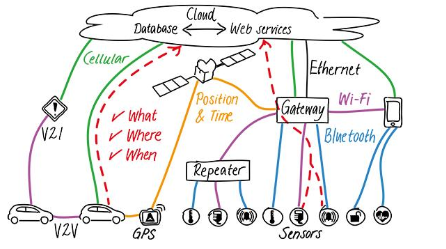 The Internet of Things (IoT) has been a hot topic for a couple of years now, and many connectivity players predict a large growth within the next ten years.

Figure 1 shows predictions of future connected devices done by the companies Ericsson and Cisco. The graph shows a growth of the personal devices such as phones, tablets, laptops, game consoles; however, this growth is limited by how many people we are on the planet. The real large growth is predicted from all other types of connected small devices in areas like home automation, smart energy, elderly care at home, transportation, asset tracking and many others. The number of these devices is virtually unlimited. This growth is already underway, but

today most of the applications with using devices connected via the Internet are vertical – these closed applications are typically referred to as “silos”.

The real impact of IoT will occur when data from the silos are combined to create complete new applications. This evolution will only be possible if the data from all the small devices are made available on the Internet. The data from the small devices combined with the new knowledge emerging in the area of “big data” will create the framework for many new types of applications. This progress will drive the growth of IoT. The question is how to infuse this progress when there are many different wireless technologies in the IoT atmosphere.

Figure 3 lists some IoT related international standards but there are many others (e.g. domain-specific standards within metering such as Wireless M-Bus and more).

Today, the devices operating with in the “last 100 meters” are typically not connected. The wide-area network is to a large extent connected through smart phones, home routers (e.g. ADSL routers) and GSM/3G/4G routers.

The “last 100 meters” presents >90% of the potential, but the ways to achieve the connected vision are extremely diverse. Many different technologies compete in this space including international standards, domain-specific standards (used in one specific vertical) and many proprietary technologies.

An architecture with a gateway that serves as an interface between the wide-area network (Internet) and the short range network is required to complete the “last 100 meters” architecture.

Figure 7: Fixed AND mobile use cases

A required feature of the chosen IoT short range technology is to support mobile use cases where a smart phone or other mobile device can be used as a temporary gateway. There are also some applications where the same IoT device (sensor) is used for both mobile and fixed use cases (see figure 7). Important drivers when selecting the appropriate short range wireless technology for IoT use cases include the following:

Which wireless technologies should one choose?

Figure 8 shows a graphic representation of the short range technologies that best accommodate the drivers and requirements listed in section three.

This graph mainly shows technologies that are available in mobile devices such as smart phones, laptops, etc. The reason for only showing wireless technologies available in mobile devices is the above mentioned requirement on a largely available ecosystem. One exception to the rule is 802.15.4 (including standards and protocols such as ZigBee, WirlessHART, Thread and others), which both fulfills the requirement on an internationally used standard and is widely used in early IoT use cases primarily for building automation and smart energy applications.

The illustrated range is point-to-point and heavily depends on the individual devices’ radio design and shall thus be considered as an indication only. The same concept applies for power consumption since the actual power consumption is use case dependent. Our illustration

should be viewed as anindication of how well the different technologies support low power applications.

As we are focusing on the “last 100 meters” connectivity, we will look more into the wireless technologies situated to the left of the blue dotted line.

Figure 9 shows a table with different wireless technologies in specific verticals according to u-blox. Infrared and NFC can be ruled out except for very specific use cases / verticals. u-blox believes that 802.15.4-based technologies will become a niche technology area, especially

where it is already established, such as in home and building automation and smart energy (see more on this in the conclusions section later).

Figure 10: Comparison of wireless technologies and their usefulness in IoT

Conclusions that can be drawn from the figure 10 table include the following:

The u-blox conclusion is that Bluetooth low energy has a high potential in becoming an important technology for the “last 100 meters” in low power, low cost, small devices. However, there will still be use cases where 802.15.4-based technologies are used especially in areas where it is already established. In spite of its installed base in smart energy, home and building automation applications, u-blox envisions that 802.15.4 will face competition in Bluetooth low energy in these applications as well. Wi-Fi will be used in devices where cost and low power is less important and as a wireless backbone combined with the other wireless technologies.

The importance of gateways in IoT


Gateways are a requirement when connecting small low-power short range devices. Sometimes the gateways are fixed devices connected to a backbone network and sometimes they are embedded within other devices e.g. in an Internet router (ADSL or GSM/3G/4G routers or similar). A mobile device can also act as a gateway and there ar e several use cases where this use can be applicable. For example, one use case is when the sensor / device is carried together with the phone e.g. a body-worn sensor. Another use case is where the smartphone becomes a temporary gateway when it approaches the sensor / device (e.g. an access control system where the phone is used to authenticate the access to Internet services).

Figure 13 shows Bluetooth low energy and 802.15.4 used as transport for IPv6 based communication “end-to-end”. In this use case, an IP-based application in the sensor / device is transparently connected to an Internet service. This case typically uses compression technologies such as 6LoWPAN and CoAP, to enable an efficient use of the limited resources of a Bluetooth low energy or an 802.15.4 network. This use case may also enable “end-to-end” security although this will require more computing power in the sensor / device.

Figure 14 shows the use of Wi-Fi serving as an intermediate backbone connecting islands of sensors / devices. This makes use of the multiradio capability of the short range radio chips already available e.g. chipsets supporting simultaneous use of Bluetooth low energy and Wi-Fi

to create miniature gateways. The gateways communicate via Bluetooth low energy down-stream and Wi-Fi up-stream. The Wi-Fi up-stream link is connected to a Wi-Fi router connected further upwards to Internet services. This scenario may be used to extend the range or the system size.

Figure 15 shows the use of gateways to create a system with interconnecting multiple technologies. The gateways are used to perform the necessary translation to a common backbone (e.g. an IPv6 backbone). This use is especially interesting and easy to use when interconnecting technologies via IPv6 “ all-the-way, ” as described in Figure 13.

The following are the conclusions one can make from this paper: