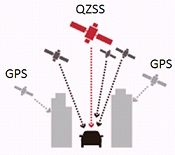 “u-blox’ quick time to market with QZSS receiver technology allowed us to be the first on the market with a highly accurate, highly reliable positioning device that already capitalizes on the first QZSS satellite in service” said Mr. Atsushi Ishibashi, responsible for marketing at Yupiteru, “The GWR73SD is particularly attractive for drivers in urban environments in Japan where GPS satellites can be blocked by tall buildings.”

QZSS, or “Quasi-Zenith Satellite System”, is a new GPS augmentation system supporting Japan and Southeast Asia based on high-elevation satellites. The system can boost GPS accuracy to below one meter, especially in urban canyons such as Tokyo as the satellites are geostationary in the sky directly overhead in Japan. The first QZSS satellite has been in service since 2011.

Performance of QZSS navigation systems will continue to improve as the 4 satellite configuration reaches completion in the late 2010s.