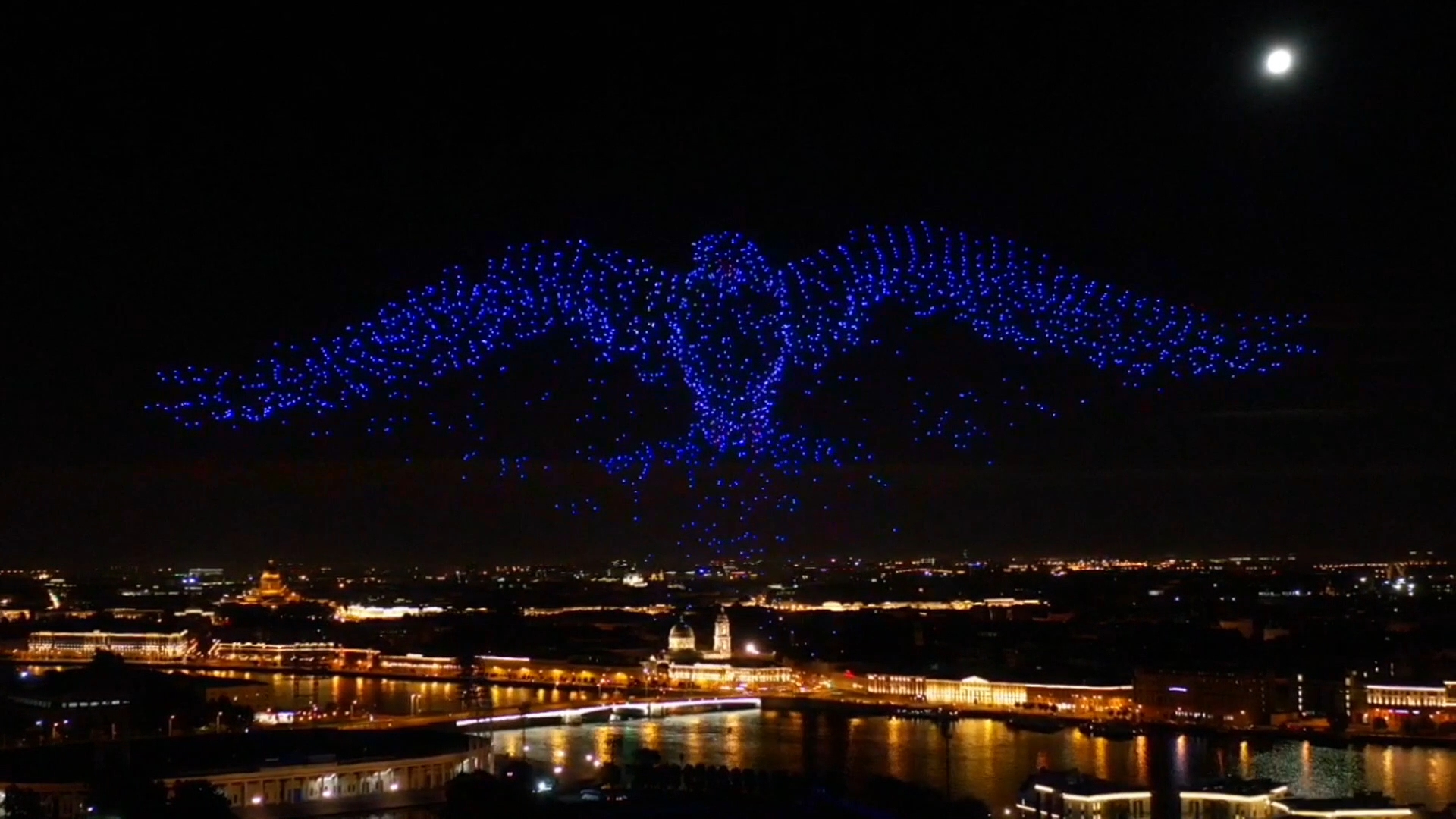 Thalwil, Switzerland – October 28, 2020 – u-blox (SIX:UBXN), a global provider of leading positioning and wireless communication technologies, has announced that it supplied the high-accuracy technology that made it possible to fly the world’s largest swarm of drones. The record-breaking simultaneous flight of 2198 miniature UAVs (unmanned aerial vehicles) was launched into the night sky over Saint Petersburg, Russia, on September 3. The ten-minute long drone show included a flying dove with a wingspan of 600 meters, which was visible from three kilometers away.

Geoscan, which built and programmed the drones and ran the display, chose u-blox positioning technology for its combination of accuracy, reliability, performance, and ability to access positional data from both the GLONASS and GPS satellite navigation constellations. The Geoscan Salute drones, which are just ten centimeters across, were designed exclusively for use in group flights and drone shows. The drones use u-blox NEO-M8P high precision GNSS modules to provide the positioning data necessary to ensure that they can be placed in the sky with a high degree of accuracy. This makes them less likely to collide with each other and enables them to be moved more quickly and efficiently. The end result is a more fluid drone show, in which the improved positional accuracy of each drone contributes to a better overall display and contiguous figure forms. Salute drones can also return to their base stations automatically at the end of a show.

The NEO-M8P high precision GNSS module used in the Salute drones implements a real-time kinematic (RTK) approach, that improves positional accuracy by comparing the phase of a signal being broadcast from a positioning satellite with that of the same signal that has been received and re-broadcast from a fixed base station. The accuracy gained in this way enables drones to calculate their relative positions to within millimeters, and their absolute positions to within one centimeter of the intended position.

Geoscan has been producing drone displays for the past two years, starting with just 40 drones flying at once. Semen Lapko, Head of Drone Show Project, Geoscan, said: “The u-blox modules in our Geoscan Salute drones have improved our drones’ positioning accuracies to about one centimeter, and have helped reduce pre-launch preparation time. Drones now move more quickly and accurately, while also operating more efficiently.”

About u‑blox
u‑blox (SIX:UBXN) is a global technology leader in positioning and wireless communication in automotive, industrial, and consumer markets. Their smart and reliable solutions, services and products let people, vehicles, and machines determine their precise position and communicate wirelessly over cellular and short range networks. With a broad portfolio of chips, modules, and secure data services and connectivity, u‑blox is uniquely positioned to empower its customers to develop innovative and reliable solutions for the Internet of Things, quickly and cost‑effectively. With headquarters in Thalwil, Switzerland, the company is globally present with offices in Europe, Asia, and the USA. (www.u‑blox.com)

Geoscan specializes on production of two types of UAV: fixed-wing and multirotor. One of the main advantages of their UAVs is in-house Russian-based production. Their production line uses only few third-party components. Prevailing part of own developed components allows to reduce prime costs seriously. Our electronic equipment and UAV production facilities, design, and software development is located on a 5,500 m2 area in Saint Petersburg. Geoscan group has offices in Moscow and Saint Petersburg.

Geoscan supplies its products to 12 countries. The unique advantages of Geoscan technology are record length and duration of flight. Quality of our UAVs allows to compete and surpass most of the global equivalents. (https://www.geoscan.aero/en)