During the first half of 2015, worldwide sales showed a 33.1% rise over the same period last year, and encouraging progress was reported in all regions.

In the Americas, growth continued positively, resulting in 48.1% expansion compared to the same period last year. Continuing improvement in the macro-economic climate pushed up demand for our customers’ products and hence our own. u‑blox posted a pleasing increase in market share and higher volumes, thanks to a number of new customers. Interest in our new products and technologies is keen and provides a solid foundation for future operations.

In Europe, the Middle East and Africa (EMEA), growth remained static in some countries. Expansion was reported in countries with healthy export markets, resulting in a 24.3% increase in revenues for automotive and industrial applications and a significant rise in new accounts and business opportunities.

Growth in Asia-Pacific (APAC) reflected the region’s vibrant economies and was a major factor in consolidating our market share. While sales to existing customers continued to rise, u‑blox also acquired some significant new accounts primarily in China. Our reputation for ongoing innovation and the delivery of new technologies continues to attract new customers and has seen us involved in several major ramp-ups with our products. Revenues grew strongly in all application areas, and the overall increase stood at 29.9%.

The company’s product and service business segments both generated positive EBIT in the first semester. Consolidated revenues increased by CHF 40.3 million to CHF 161.9 million while EBIT rose from CHF 18.8 million to CHF 24.8 million, a 31.9% increase over the same period in 2014. Net profit rose to CHF 15.0 million.

In the first half of 2015, u‑blox’s expansion, acquisition, manufacturing and product strategies moved it closer to its target of half-billion-dollar annual revenues in the foreseeable future.

The major news on the acquisition front was u‑blox’s takeover of Berlin-based lesswire’s automotive short-range modules operations. This strengthened our automotive-grade Bluetooth and Wi-Fi module products, our position in the automotive market and gave us a team of key engineers. Both staff and products have been smoothly and seamlessly integrated into u‑blox’s operations. The team is located in Berlin.

During the first half of 2015, u‑blox opened up an office in Osaka, Japan, to provide local support for M2M (machine-to-machine) customers in the south of Japan. u‑blox also set up another office in Chongqing to demonstrate interest to further invest in the fast growing market of Western China and getting closer to local automotive and industrial customers.

The company also became a member of the M2M Alliance, a platform for providers and users designed to promote M2M technologies and solutions. A second strategically motivated move was u‑blox’s decision to become a member of the CAR 2 CAR Communication Consortium, which is dedicated to the development and deployment of Cooperative Intelligent Transport Systems (C-ITS). Both memberships position u‑blox firmly within the community of movers in the “Internet of Things” (IoT) wireless communication industry.

Ongoing R&D is indispensable if u‑blox is to satisfy its customers’ wide-ranging and ever-changing needs and stay at the head of the industry. u‑blox launched no fewer than six new products during the first half of 2015. The 4G LTE voice-data modem TOBY-L280 is one of the world’s smallest and fastest devices of its kind and supports HSPA+ and GSM/GPRS, which equates to the Asia-Pacific area. Another u‑blox product, the ODIN‑W2 took Connected World magazine’s IoT Innovation Award, which honors the most transformative businesses in the IoT sector. The third major launch was CAM-M8C, a tiny surface-mount GNSS global positioning module with an integrated wideband chip antenna for reception across the entire L1 band. u‑blox expanded its position for short range radio solutions with launches including: the ELLA-W1 series of compact, automotive-grade, multiradio modules; EMMY-W1, a line of combined Wi-Fi, Bluetooth and NFC modules for easy onboard implementation of cutting-edge wireless standards; and, finally, the dual-band Wi-Fi and dual-mode Bluetooth standalone ODIN‑W262 module. All these developments will strengthen and consolidate u‑blox’s position in the markets of the future.

u‑blox launched a new-look website under the company’s motto: locate, communicate, accelerate. The website provides customers with access to superior services and a better and more intuitively organized overview of products. It will feature online support and a forum, and is a reflection of the importance u‑blox attaches to well caring its customers.

In the first half of 2015, the company made about 80% of its total revenue from 63 customers. u‑blox’s largest customer accounted for 9% of revenue. u‑blox served over 5’000 customers and achieved global expansion into new regions and markets.

Finance costs of CHF 6.5 million consist primarily of realized and unrealized foreign exchange losses on receivables and payables due to the SNB’s unpegging of the CHF/EUR rate in January 2015. Finance income was CHF 0.2 million. 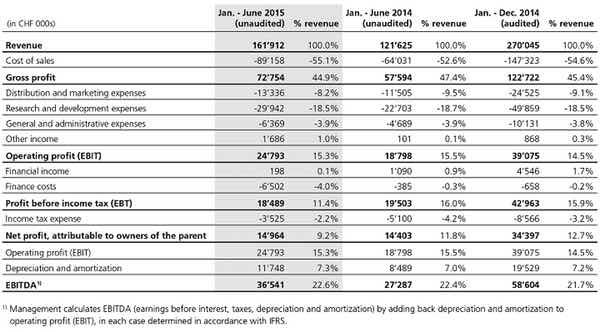 In the first half year 2015, u‑blox generated cash from operating activities in the amount of CHF 20.5 million as compared to CHF 15.7 million in the same period last year.

In April 2015, u‑blox placed a fixed-rate domestic straight bond worth CHF 60 million. The issue was designed to increase the company’s financial flexibility and guarantee Group liquidity during the years ahead.

The company also repaid the short-term CHF 20 million bank loan taken up in connection with short-range radio acquisitions. The net cash provided by financing activities also contains the dividend payment in May 2015 of CHF 10.7 million and the increase of the share capital due to the exercise of share options of CHF 4.7 million. 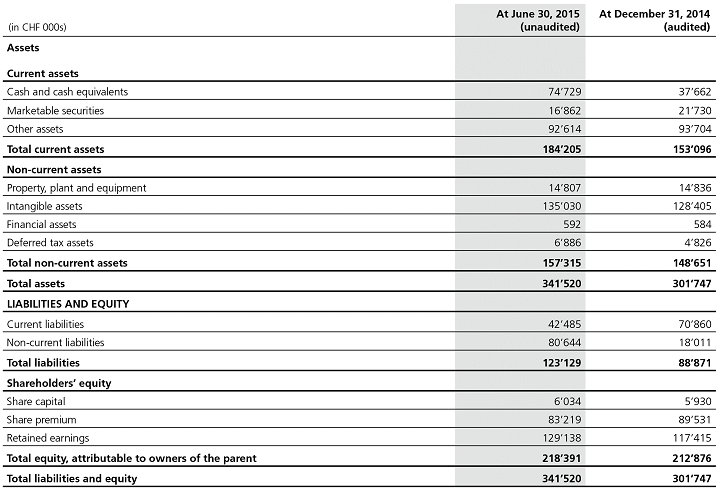 Risk is an inherent factor in any business or operation, and many of our customers face ongoing uncertainty. As entrepreneurs, we can take active steps in areas that are under our control to decrease the impact of risk from global, regional or national economic crises. First, we ensure that the quality of our products is second to none and that the continued expansion of our product offer meets our customers’ needs. Second, we look for a natural hedge against currency exchange movements, with production cost and operational cost matching our income currencies. And third, we have a wide diversified and ever increasing customer base, with no single customer out of a total of 5’000 accounting for more than 9% of our revenues.

For 2015, u‑blox keeps its already announced guidance with an EBIT between CHF 48 million and CHF 53 million, based on revenues of between CHF 335 million and CHF 345 million. These expectations exclude unforeseen economic adversity and foresee budgeted exchange rates (USD/CHF: 0.974; EUR/CHF: 1.065, GBP/CHF: 1.500). For more information, please view the 2015 Half-Year Report and presentation slides online at:

Swiss u‑blox (SIX:UBXN) is a global leader in positioning and wireless semiconductors and modules for the automotive, industrial and consumer markets. Our solutions enable people, vehicles and machines to locate their exact position and communicate wirelessly over cellular and short range networks. With a broad portfolio of chips, modules and software solutions, u‑blox is uniquely positioned to empower OEMs to develop innovative solutions for the Internet of Things, quickly and cost-effectively. With headquarters in Thalwil, Switzerland, u‑blox is globally present with offices in Europe, Asia and the USA.
(www.u‑blox.com)