Remark: All numbers in this report are IFRS based. Adjusted numbers are provided in the last table to this report.

Thalwil, Switzerland – August 24, 2017 – u‑blox (SIX: UBXN), a global leader in wireless and positioning modules and chips, today announced results for the first half year. The company maintained a strong financial performance, posting a 7.9% increase in revenues, which, combined with the effectiveness of u‑blox’s strategic approach, helped to further solidify profitability. During the first half of 2017, consolidated revenues stood at CHF 193.9 million.

u‑blox registered another increase in gross profit from CHF 82.5 million to CHF 87.4 million, with gross profit margin remaining high at 45.1%. Operating profit (EBIT) was up from CHF 27.8 to CHF 29.5 million, representing an improvement of 6.1% over the same period last year, while the EBITDA margin stood at 20.8%. There was a 2.6% decrease in net profit, which declined from CHF 18.5 million in 2016 to CHF 18.0 million, due to foreign exchange impact. Net cash flow from operations was CHF 22.1 million, which represented 11.4% of revenue. The balance sheet remained solid, with a healthy equity ratio of 58.1%.

All these figures underscore u‑blox’s ability to meet medium to long-term revenue and profit targets. A full pipeline of new products and developments is likewise a firm indication of potential future growth.

The first half of 2017 showed continued growth in u‑blox’s positioning & wireless products segment.

Consolidated revenues from chips and modules for positioning and wireless connectivity rose by 7.9% from CHF 179.5 million in the first half of 2016 to CHF 193.8 million during the first half of 2017. Revenue growth was slightly negatively impacted by -0.3% foreign exchange decay. Wireless services (including intra-Group sales) generated CHF 12.3 million in revenues compared with CHF 15.1 million for the same period last year.

In Asia, the economic environment was strong, with production capacity in the electronics industry running at limits. Our revenues grew by 25.3%, driven by strong product sales in all categories. Several customers reported large-scale operational expansion, while new applications, such as wearables and the smart bike also boosted our revenues.

In the Americas, business declined by 20.7% as a direct result of the slowdown in 2016, which led to lower business activity at the beginning of the year. Compared with the second half of 2016, however, revenue increased again. The migration to new LTE-based cellular standards generated new traction as the industry has now opted for the M1 standard for M2M applications. There was a strong increase in sales of LTE-based modules, with sales of CDMA-based products declining. Demand in the automotive sector remained buoyant.

The EMEA region delivered a 8.5% growth in revenues over the first half of 2016. Strong demand in the industrial and automotive sectors drove business forward. In-car communication and navigation, smart meters, industrial controls, road pricing and asset tracking guaranteed expanding business.

u‑blox maintained a wide customer base during the first half of 2017, generating around 80% of its total revenue from 74 customers, with the largest accounting for 5.3%. The company extended its operations to various new markets and regions, and supplied products and services to 5700 customers.

In all regions, u‑blox pursued a record number of new business opportunities, driven by general interest in the Internet of Things (IoT).

Gross profit saw a 5.9% improvement during the first six months, taking it from CHF 82.5 million in the same period last year to CHF 87.4 million. Gross profit margin stood at 45.1%, a small decline over first half year 2016.

Wide-ranging expansion in our operations drove distribution and marketing expenses up from CHF 15.9 million to CHF 17.2 million. This figure is equivalent to 8.8% of revenue, compared with 8.8% during the same period last year.

Finance income totaled CHF 0.3 million, while finance costs amounted to CHF 7.0 million, due mainly to negative unrealized foreign currency impacts, and interest on the bonds issued in 2015 and 2017.

u‑blox maintained a strong balance sheet during the first half of 2017, the equity ratio amounted to 58.1% influenced by the purchase of treasury shares during the period. Cash, cash equivalents and marketable securities totaled CHF 168.6 million as of June 30, 2017, compared with CHF 157.1 million on December 31, 2016. Also u‑blox carries treasury shares in the amount of CHF 24.4 million; shares that will serve the employee stock options program. In 2017, u‑blox placed a fixed-rate domestic straight bond worth CHF 60 million. The issue will further increase the company’s financial flexibility and ability for strategic action.

u‑blox is pleased to report that u‑blox remains on course for sustained growth and profitability thanks to a time-tested strategy that is founded on four discrete pillars: ongoing strengthening of our leading market position; continuing technological development and innovation; outstanding operational performance, and strategic partnerships. During the first half of 2017, u‑blox made significant advances in all three of its key strategic technology areas: positioning, cellular, and short range.

In February, the company announced the launch of a groundbreaking, super-low-power GNSS receiver chip for wearable applications. The new super-efficient chip offers a unique balance of performance and ultra-low power use, cutting power consumption by two-thirds to just 20 mW, while supplying one positional update every second with virtually no loss of accuracy.

This was followed in May by the world’s smallest quad-band LTE Cat M1 module. M1 is one of the new LTE standards for M2M solutions. Carriers in the US have selected this standard and are now expanding coverage on a broad scale.

Finally, in June, u‑blox announced it was accelerating deployment of its VERA-P1 series V2X communication modules for Advanced Driver Assistance Systems, which are designed to make vehicles safer and increase the level of automation. All major car OEMs put considerable effort in this new functionality.

In addition to product news, in the beginning of the second half of 2017, u‑blox announced a new strategic initiative with Sapcorda Services GmbH. Later in 2017, Sapcorda will be entering into a joint venture with Bosch, Geo++ and Mitsubishi which will bring high precision GNSS positioning services to mass market applications and facilitate the establishment of a worldwide available and affordable solution for system integrators, EOMs and receiver manufacturers.

In the first six months, u‑blox released several new products designed to meet its customers’ wide-ranging and continuously evolving needs. These products are vital in our range of offerings developed, designed and produced to keep the company at the forefront of existing markets, while enabling u‑blox to make inroads into future markets. Below follow details of some of the first six months’ new product highlights.

The ultra-small, multi-GNSS ZOE-M8G module launched in January is an ideal location sensor for wearables, drones and asset trackers. It offers exceptionally high performance and was designed for markets where very small size, minimal weight and high location precision are essential. It simplifies product design because it can be used with passive antennas, eliminating the need for additional components.

The two NINA-W1 Wi-Fi modules introduced in March comply with all the latest security standards and are the most advanced of their kind for industrial markets. With ultra-low power consumption they are ideal for Wi‑Fi applications including telematics, low-power sensors, connected buildings, points of sale, and health devices.

u‑blox develops and sells chips and modules for positioning and wireless connectivity that are used in automotive, industrial and consumer applications. Revenue was CHF 193.8 million for the first half of 2017 compared with CHF 179.5 million during the same period last year.

u‑blox also offers wireless communication technology services in the form of reference designs and software. In the first semester, revenue for wireless services was CHF 12.3 million compared with CHF 15.1 million in the first half of 2016 (including intra-group revenue, recorded on newly defined basis).

There were no changes in the board and management during the period under review. 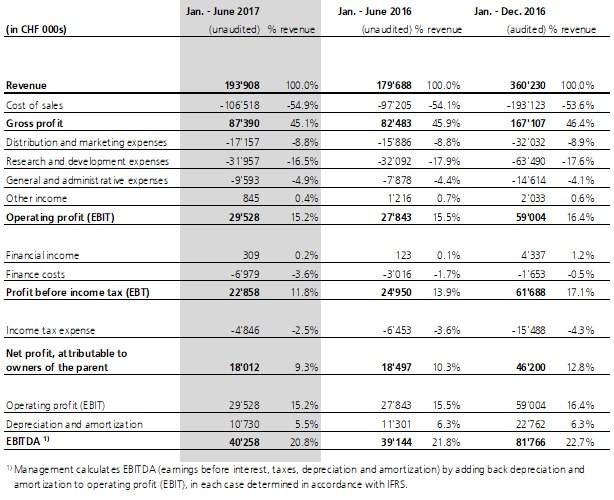 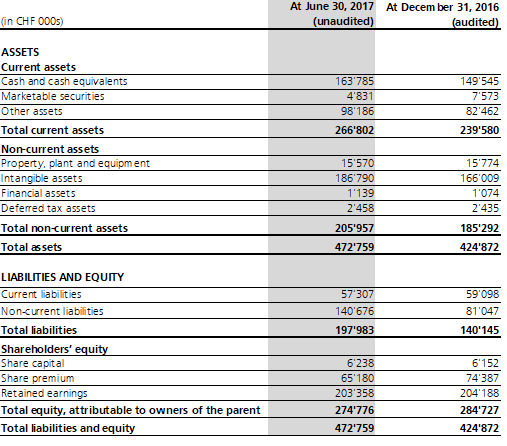 Adjusted numbers are provided below for allowing comparison with industry peers. 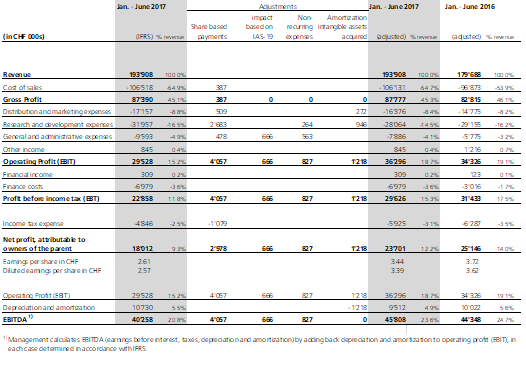 Swiss u‑blox (SIX:UBXN) is a global leader in wireless and positioning modules and chips for the automotive, industrial and consumer markets. u‑blox solutions enable people, vehicles and machines to locate their exact position and communicate wirelessly over cellular and short range networks. With a broad portfolio of chips, modules and software solutions, u‑blox is uniquely positioned to empower OEMs to develop innovative solutions for the Internet of Things, quickly and cost-effectively. With headquarters in Thalwil, Switzerland, u‑blox is globally present with offices in Europe, Asia and the USA.

Disclaimer
This release contains certain forward-looking statements. Such forward-looking statements reflect the current views of management and are subject to known and unknown risks, uncertainties and other factors that may cause actual results, performance or achievements of the u‑blox Group to differ materially from those expressed or implied. These include risks related to the success of and demand for the Group’s products, the potential for the Group’s products to become obsolete, the Group’s ability to defend its intellectual property, the Group’s ability to develop and commercialize new products in a timely manner, the dynamic and competitive environment in which the Group operates, the regulatory environment, changes in currency exchange rates, the Group’s ability to generate revenues and profitability, and the Group’s ability to realize its expansion projects in a timely manner. Should one or more of these risks or uncertainties materialize, or should underlying assumptions prove incorrect, actual results may vary materially from those described in this report. u‑blox is providing the information in this release as of this date and does not undertake any obligation to update any forward-looking statements contained in it as a result of new information, future events or otherwise.