A year of expansion
Although there were weaknesses in EMEA and the Americas with decline in demand, u‑blox expanded its market position in Asia, and experienced a clear global turnaround in revenue around the last quarter resulting in growth of 15% over the first half year. Although revenue was flat, u‑blox remained profitable. The chip and module businesses generated positive income from operations during 2009. Consolidated revenue was down by CHF 1 million to CHF 73.5 million with increased volumes, while EBIT was decreased from CHF 8.4 million to CHF 5.2 million, a 38% decrease over the prior year. Net profit was CHF 3.3 million, representing a 4.5% net profit margin for 2009.

Successful acquisitions and streamlining of operations
u‑blox invested in its future through the acquisitions of Neonseven and Geotate, and increased its staff of highly-talented engineers. The acquisitions expanded u‑blox’ product and service portfolio with wireless and GPS technologies. Once a pure-play hardware GPS vendor, u‑blox is now a provider of both wireless and positioning solutions. The integration of the two companies was successfully completed, including re-structuring and alignment of all departments and processes within the u‑blox corporate structure and culture. Today u‑blox employs approximately 200 employees world-wide as compared to 100 at the end of 2008.

Increased Gross profit
Gross profit increased by 22.3% to CHF 38.9 million in 2009 from CHF 31.8 million in 2008. Gross margin was 52.9% for 2009 compared to 42.7% for 2008. The increase in relative margin in 2009 was primarily due to the migration to u‑blox 5-based modules and u‑blox 5 chipset sales which allowed the company to achieve better gross margin as compared to the previous ANTARIS generation. In 2009, about 78% of GPS module volumes was based on the u‑blox 5 generation.

Profit from operations (EBIT)
EBIT was CHF 5.2 million in 2009 as compared to CHF 8.4 million in the previous year. EBIT was mainly influenced by the two acquisitions which resulted in higher operating expenses. EBIT margin was 7.1% and EBITDA margin was 17.2% in 2009. 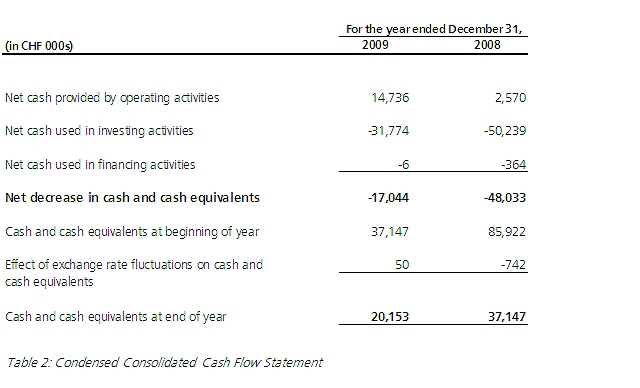 Main investing activities
In 2009, main investments were CHF 24.5 million for the acquisitions of Neonseven and Geotate. In 2009, investments of capitalized development costs were CHF 4.2 million as compared to CHF 1.2 million in 2008. CHF 1.1 million was invested in tools and test infrastructure for the further expansion of capacity and approximately CHF 1.9 million in office and laboratories expansion, mainly into 3G test equipment.

Strong balance sheet
u‑blox has a very strong balance sheet with an equity ratio of 87.5%. Cash and cash equivalents, short-term investments and marketable securities were CHF 64.9 million per December 31, 2009. Inventory level was reduced from CHF 15.6 million to CHF 7.6 million. At the end of 2009, goodwill was at CHF 17.4 million and no impairment losses were recognized on intangible assets. 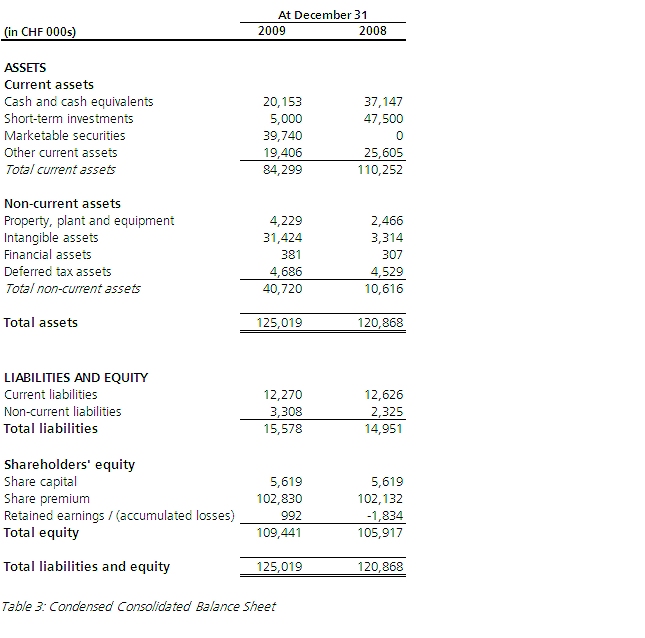 Outlook 2010
With a larger and well-positioned product portfolio, expanded know-how, and markets which will grow substantially in volume over the next few years, we are confident of a bright future for the company in 2010 and beyond. In addition to GPS and converged wireless/GPS markets, we are also a new player in the global wireless markets for machine-to-machine communications. Leveraging our existing high-volume manufacturing partners for our new wireless products also gives us a strong position to win market share and establish our reputation as a competitive provider of high-quality embedded communications products.

We expect steady economic recovery in all sectors during 2010. With our combined wireless and GPS offerings we provide our customers with the competitive edge they need to stay ahead of their competitors. This will fuel the further adoption of multi-functional devices incorporating the best of both mobile communications and GPS worlds, a market that we are uniquely positioned to address.

Our four-fold strategy of establishing technological advantages by innovation or acquisition, keeping existing customers happy while winning new ones in new markets, maintaining a top performing organization, and forming strategic partnerships, will continue.

For more information, please view the presentation slides on:
http://www.u‑blox.com/en/reports-and-presentations.html