Ongoing rise in revenue and profit

In 2015, consolidated Group revenues rose to CHF 338.3 m, equal to a 25.3% increase over 2014, with progress across all regions. EBIT climbed even more strongly and CHF 51.3 m was at the upper end of our predicted range for the year, showing a 31.3% increase over the previous year.

Growth in the Americas remained strong, and revenues were up by 32.6%. Apart from macroeconomic factors, it was fueled mainly by the rise in demand for our range of sophisticated products for tracking applications and the exponential increase in the importance of Internet of Things solutions. There was great interest in our new LTE products, while expansion into new areas, with the emphasis on telematics, led to a gratifying rise in market share and a significant increase in new customers. Overall, the keen interest in our products and technologies bodes well for future operations.

Markets in Europe, the Middle East and Africa (EMEA) reported a growth of 15.3% with expansion in all geographical regions and application areas, especially asset tracking and automation. We are pleased to report strong expansion in new business opportunities driven by lively demand for in-vehicle telematics and the trend towards increased Internet connectivity in cars.

With their economies still buoyant and an ongoing positive climate, the Asian markets reported a more-than-satisfactory 26.3% growth. There was continued high demand for wearables and portable devices, as well as automotive applications.

Firmly on course for intermediate goal

Last year marked another significant step towards our strategic medium-term goal of half-billion-dollar annual revenues. Having established the third pillar in our product offering, short range radio connectivity, with acquisitions made in 2014, we finalized a third acquisition in the short range sector in early 2015, with Lesswire, a German-based leading developer of automotive-grade short range radio system technology that supports Bluetooth and Wi-Fi. The technology enables superior-performance wireless applications and enhances in-vehicle connectivity between the telematics box and portable devices.

As in the past, we have taken steps to fully integrate the employees and assets of any companies acquired, significantly increasing our R&D capacity and widening our product offer for single-radio and multi-radio devices. Today, we offer a full selection of short range connectivity products that link devices to the Internet.

In the course of 2015, we expanded the R&D team and set up new offices in Berlin, Germany and Tampere, Finland to accommodate them. As part of a move to improve contacts with our customers and make it easier for them to connect with us when necessary, we also opened new sales offices in Chongqing, China, and Osaka in Japan.

Over the years, we have developed an extensive portfolio of easy-to-use products designed to adapt to any requirement. They include three core technologies – cellular, short range and positioning – that have made a significant contribution to the Internet of Things. In 2015 we launched significant additions to all three areas:

Our gateway to the future

A relatively new phenomenon, that we call “the Internet of Things that Really Matter,” has established itself as the de facto driving force of our business. An increasing number of customers are confronted with new business models and the need to connect more and more devices – using both high- and low-data rates – to the Internet in order to streamline the management of a virtually infinite range of applications. With our extensive product range, we are positioned to meet this need. We are further consolidating our leading role in the industry by contributing toward the definition of standards for next generation short range and cellular applications and to this end have teamed up with some of the industry’s big names, such as Intel, Huawei and Vodafone. Positioning also plays an increasingly important role and there are synergies from which all involved parties can benefit.

In 2015, the company made about 80% of its total revenue from 65 customers. u‑blox’s largest customer accounted for less than 7% of revenue. u‑blox served over 5’200 customers and achieved global expansion into new regions and markets.

R&D expenses in 2015 were CHF 65.0 million as compared to CHF 49.9 million in 2014. As a percentage of revenue, R&D expenses in 2015 were 19.2% as compared to 18.5% in 2014. The percentage increase is due to an impairment of some capitalized R&D expenses. With the acquisition of the assets of Lesswire, u‑blox strengthens its position in the short range, Bluetooth/Wi-Fi based radio communications for automotive applications.

Finance income was CHF 1.0 million. Finance costs were CHF 4.7 million, mainly due to foreign exchange effects from the EUR/CHF drop at the beginning of the year and costs for the bond issue. 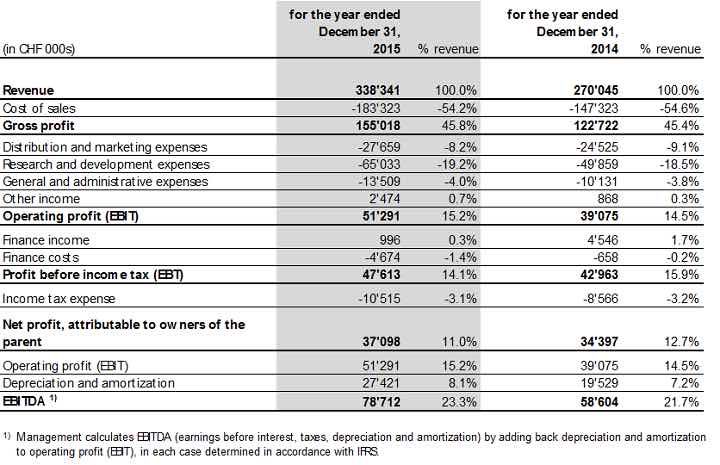 In 2015, u‑blox generated cash from operating activities in the amount of CHF 74.7 million as compared to CHF 53.7 million in 2014. A strong growth of 39.1% compared to previous year. Inventory level and trade receivables have increased due to the expansion of the business and due to higher revenue.

Main investing activities
Investments in capitalized development costs were CHF 27.0 million as compared to CHF 20.7 million in 2014. CHF 8.4 million was invested in furniture, equipment, tools and test infrastructure for the further expansion of capacity along with approximately CHF 7.6 million in software, intellectual property rights and acquired technology.

u‑blox paid in 2015 dividends of CHF 10.7 million and received proceeds from the issuance of ordinary shares connected with the employee share option plan of CHF 5.3 million. To profit from the good market conditions and to secure future operating flexibility u‑blox issued on 27 April 2015 a CHF 60.0 million bond with duration of 6 years at an interest rate of 1.625% p.a.

u‑blox has a very strong balance sheet with an equity ratio of 64.2%. Cash and cash equivalents and marketable securities amounted to CHF 124.0 million at December 31, 2015, compared to CHF 59.4 million at December 31, 2014. Despite the acquisition of Lesswire assets, goodwill decreased due to changes in EUR/CHF exchange rate from CHF 57.9 million in 2014 to CHF 56.7 million or 14.7% of total assets in 2015. Due to this strong financial position and the positive outlook, the Board of Directors proposes at the Annual General Meeting to pay out dividends. For this year an increased dividend of CHF 1.90 per share is suggested, which represents a payout ratio of 34.4% of consolidated net profit, attributable to owners of the parent.

Investments in property, plant and equipment and intangible assets increased to CHF 43.0 million in 2015 (2014: CHF 33.7 million). As a percentage of sales, the investment ratio remained stable at 12.7% in 2015 (2014: 12.5%). With the continued expansion of the R&D pipeline and the increase of number of development projects for all product categories, the investments into capitalized development costs increased to CHF 27.0 million (2014: CHF 20.7 million). Additionally CHF 5.9 million (2014: CHF 4.6 million) was invested into intellectual property rights and CHF 1.6 million (2014: CHF 1.4 million) into software.

The Board of Directors proposes a dividend payout of CHF 1.90 per share and will put the motion to shareholders for approval at the Annual General Meeting in Thalwil on April 26, 2016. 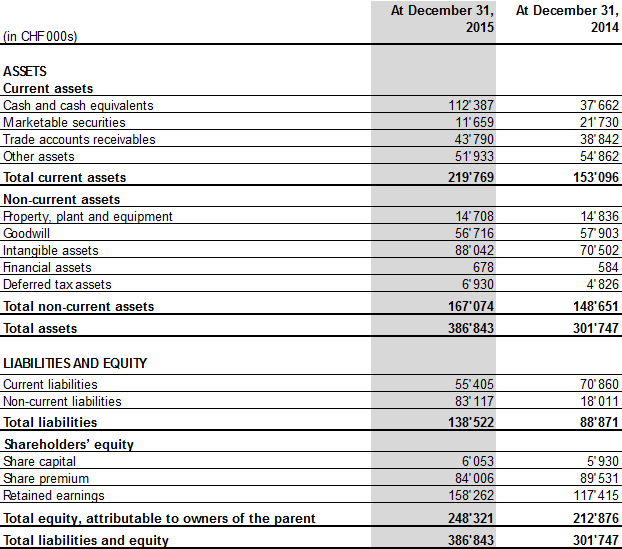 Wherever possible, we take active, practical steps to decrease the impact of risks that can threaten any business or operation, our customers included, at global, regional or national level. The first step is to ensure that we supply our customers with top-quality products that can be relied on to meet their needs and keep their own clients happy. The second is to circumvent the negative impact of currency exchange movements: to achieve this, we look for natural hedges and ensure that our production and operational costs are in line with the currencies in which our income is generated. Finally, we have a large and widening customer base of over 5'200 customers. Of these, no single customer account for more than 7% of revenue.

In 2015, Hans-Ulrich Müller retired from u‑blox Holding AG's Board of Directors after serving as Vice-Chairman since 2007. Dr. Paul Van Isegehm, who was elected to the Board in 2011, has taken over his position, and André Müller has been appointed Board member.

Billions of interconnected devices worldwide are changing the way we work, play and source our entertainment. The Internet of Things that Really Matter will transform our lives on a scale that would have been barely imaginable just a few years ago. Driverless cars lie in the not-too-distant future, but until then a plethora of telematic devices are making every aspect of driving easier, safer and more convenient than ever before. Management and tracking of vehicles, containers, fleets and assets provide transparency, making countless aspects of business more efficient and economical. And finally, manufacturers can communicate continuously with their products while they are in the field, allowing new ways of doing business and consolidating relationships with their customers. u‑blox continues to invest in a vast range of innovative new devices that are driving the speed of change, bringing high-speed connectivity and access to unlimited cloud computing for an ever-growing global market. But we are not only at the forefront of technological development. We also play a key role in the establishment of industry standards that will define and delineate the way forward in the years ahead. With a strong customer base, our future growth potential stands on solid foundations. For the current year, we are targeting revenues of between CHF 395 million and CHF 405 million, with EBIT of between CHF 56 million and CHF 60 million. These expectations exclude unforeseen economic adversity and budgeted exchange rates (USD/CHF: 0.97; EUR/CHF: 1.08; GBP/CHF: 1.42).

At the General Assembly the Board intends to propose re-election of each board member with the exception of SooBoon Koh and election of Gina Domanig.

For more information, please view the Annual Report 2015 and presentation slides online at:

Mrs. Gina Domanig holds a bachelor of science degree in Finance and Economics (Arizona State University) and two MBA degrees (Thunderbird School of Management, USA and ESADE, Spain). Gina Domanig is managing partner at Emerald Technology Ventures AG since 2000. From 1991 to 1999, she held various positions at Sulzer AG prior to becoming Senior Vice President, Head of strategic planning and acquisitions. She held different positions in the finance industry from 1988 to 1991. Mrs Domanig is citizen of Switzerland, USA and France.