Outstanding revenue growth and more profit
In 2012 u‑blox experienced outstanding revenue growth in the Americas (+94.0%), strong growth in EMEA (+28.1%) and solid development in APAC (+9.1%), resulting in overall sales growth of 38.8% over 2011. Excellent growth was experienced in primary target market sectors, particularly automotive navigation and mobile resource management. Both u‑blox’ product and service business segments generated positive EBIT during 2012. Consolidated revenue was up by CHF 48.4 million to CHF 173.1 million with increased volumes, while EBIT increased from CHF 21.2 million to CHF 23.1 million, an 8.7% increase over the previous year. Net profit was CHF 17.2 million, representing a 9.9% net profit margin for 2012.

The company maintained a continuous cycle of innovation to diversify its existing product portfolio to meet new market requirements. u‑blox continued to update its R&D schedule on a bi-annual basis to maintain a solid pipeline of new products that meet impending market demands. In parallel, u‑blox reacted quickly to address longer term market trends by investing in strategic new technologies, particularly in the area of 4G(LTE) (“Long Term Evolution”) mobile communications. These activities resulted in strong sales growth while laying the foundation for the next-generation of wireless products which are necessary to secure long-term growth and maintain profitability. u‑blox expanded hereby the company’s proven strategy of offering both chips and modules.

During 2012, u‑blox made important acquisitions that brought crucial 4G (LTE) chip and software technology in-house. UK-based Cognovo and UK-Pakistan based 4M Wireless gave u‑blox the necessary intellectual property and proven technologies to develop its own 4G (LTE) chip. u‑blox has now acquired Cognovo’s “Software Defined Modem” chip design technology which will give the company the speed and agility to react quickly to specific market requirements for 4G connectivity combined with special features. u‑blox sees this as an important differentiator in the medium and long-term future as it allows the company to better target diverse markets for machine-to-machine communications, markets that are experiencing an exponential increase in the number of connected devices. A third acquisition, Finland-based Fastrax, consolidated u‑blox’ global position as the leading provider of positioning modules. It also brought the company industry experts on GPS/GNSS modules with integrated antenna, a module technology that allows us to address an additional customer base.

With healthy liquidity of CHF 60.6 million, the company remains positioned to quickly acquire new products, technology and expertise to maintain its market lead and momentum.

Positioning products highlights
u‑blox announced eight new positioning products during the year targeting markets for devices compatible with GPS plus the Russian GLONASS and Japanese QZSS satellite navigation systems, as well as addressing market demands for lower power consumption, smaller profile, and integrated antenna. Of special significance was the introduction of the seventh generation satellite receiver engine, u‑blox 7, a technology embodied in the company’s new multi-GNSS chip with the industry’s lowest power consumption. This chip family is used for many high volume applications, especially in the consumer markets. It is also at the core of the company’s new line of u‑blox 7 positioning module series MAX-7, NEO-7, and LEA-7.

Innovations
Fast and timely innovation is what generates the company’s success. During 2012, u‑blox spent CHF 32.7 million in R&D. Innovation was achieved in these areas:

During the year, u‑blox was presented with two prestigious industry awards, the Swiss Information and Communication (ICT) “Champion” award for a clear, logical and sustainable business model and track record, and M2M magazine’s Global Top 100 award as one of the most innovative providers of machine-to-machine technology and connected devices.

u‑blox worked closely with Flextronics, its main module production partner based in Austria, to reduce production time, stock levels and further increase quality. This resulted in two major awards jointly presented to u‑blox and Flextronics, the Austrian Logistics Award, and Austrian Fab Award for a highly efficient production system. Additionally, a new quality and reliability lab was set up at u‑blox headquarters in Thalwil with state-of-the-art test equipment.

The company’s CSR program was further expanded and deployed throughout the company, with emphasis on human rights, social and environmental responsibility. u‑blox now adheres to the United Nations Global Compact.

In 2012, the company made about 80% of its total revenue from 57 customers. The largest customer accounted for less than 13% of revenue. u‑blox served 3’500 customers, and achieved global expansion into new regions and markets.

Research and product development
R&D expenses in 2012 were CHF 32.7 million as compared to CHF 22.1 million in 2011. As a percentage of revenue, R&D expenses in 2012 were 18.9% as compared to 17.7% in 2011. The increase is due to the strategic investments into 4G (LTE) technology and three acquisitions. With the acquisition of Cognovo Ltd. and 4M Wireless Ltd., u‑blox is now able to develop a new wireless modem platform based on its own IP, allowing the company to meet market demand for wireless integrated circuits. Through the acquisition of Fastrax in October 2012, u‑blox strengthened its positioning module product offering and expanded GNSS R&D capacity.

Finance income and costs
In 2012, finance income was CHF 0.9 million. Finance costs were CHF 2.4 million, mainly due to negative foreign exchange results and conversion effects from operations and translation effects of amounts converted for the acquisitions. 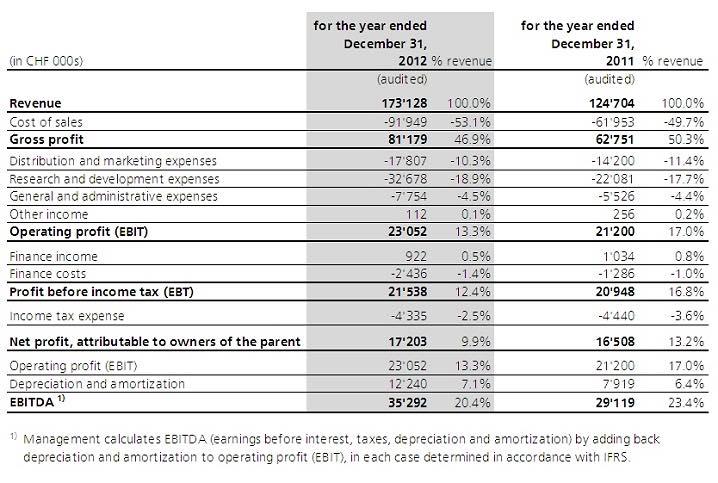 Main investing activities
In 2012, investments in capitalized development costs were CHF 3.7 million as compared to CHF 4.0 million in 2011. CHF 4.3 million was invested in furniture, equipment, tools and test infrastructure for the further expansion of capacity and approximately CHF 4.0 million in intellectual property rights and acquired technology.

Financing activities
In 2012, there was a repayment of CHF 11.1 million of a financial liability out of acquisitions, a dividend payment of CHF 5.7 million and proceeds from the issuance of ordinary shares connected with employee share option plan of CHF 1.2 million.

Dividend
Due to this strong financial position and positive outlook, the Board of Directors proposes at the Annual General Meeting to pay-out dividends. For this year a dividend of CHF 1.00 per share from capital reserves is suggested, which represents a raise of 11.1%, and a payout ratio of 36.7% of consolidated net profit, attributable to owners of the parent. 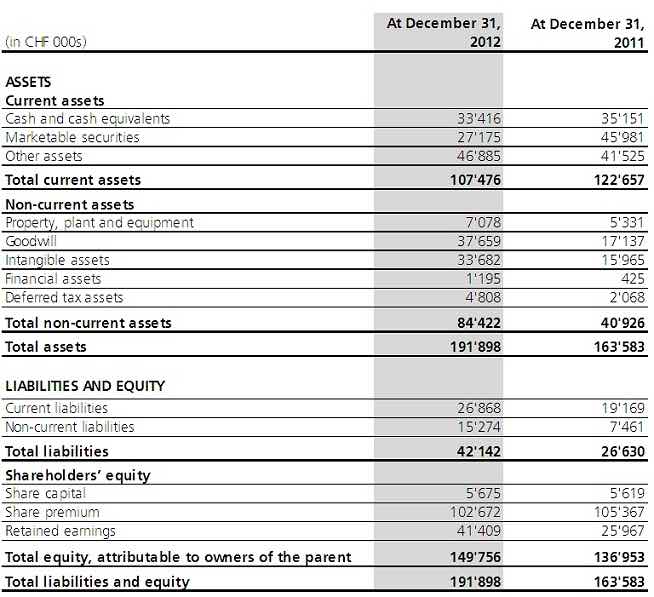 Continued uncertainty in several European economies as well as other markets will continue to be an issue in 2013 and will affect some of u‑blox’ customers. The strength of the Swiss Franc remains at a high level, though the company counts on a more stable currency situation in the near future. At the gross margin level the company again enjoys a perfect natural hedge as all its production costs are incurred in the same currencies the company uses to invoice its customers. u‑blox’ increased headcount also occurred primarily outside of Switzerland.

u‑blox has gained strong momentum and market traction to allow itself to outgrow its core markets, and this trend should continue. The company’s current product portfolio is well-positioned to meet the demands of automotive and industrial customers, and the company expects a growth in the consumer markets where it sees a growing opportunity in several promising markets. The market demand for embedded connectivity based on 4G(LTE) technology will begin during 2013, with major ramp-up from 2014. The 4G(LTE) product development is synchronized with this market development.

Mobility of people and goods will continue to form the basis of growth:

With a very strong and diverse base of global customers and an excellent business strategy and brand, u‑blox looks forward to continued revenue growth. For the year 2013, u‑blox gives an EBIT guidance of approximately CHF 28 million, and a revenue guidance of approximately CHF 215 million. This outlook is based on the absence of unforeseen economic adversity and exchange rates assumed at budget level (USD/CHF: 0.95; EUR/CHF: 1.20).

Swiss-based u‑blox (SIX:UBXN) is a global leader in positioning and wireless semiconductors for the consumer, industrial and automotive markets. Our solutions enable people, vehicles and machines to locate their exact position and wirelessly communicate via voice, text or video. With a broad portfolio of chips, modules and software solutions, u‑blox is uniquely positioned to enable OEMs to develop innovative personal, professional and M2M solutions quickly and cost-effectively. With headquarters in Thalwil, Switzerland, u‑blox is globally present with offices in Europe, Asia and the USA.