A year of consolidation and growth

In 2011 the company recorded revenue growth in APAC (+3.3%), the EMEA (+5.8%) and Americas (+29.9%) resulting in overall growth of 10.6% over 2010. Measured in local currencies the revenue increased by 29%. Growth was experienced in most target market sectors. Both product and service business segments generated positive EBIT during 2011. Consolidated revenue was up by CHF 11.9 million to CHF 124.7 million with increased volumes, while EBIT increased from CHF 19.1 million to CHF 21.2 million, an 11.2% increase over the previous year. Net profit was CHF 16.5 million, representing a 13.2% net profit margin for 2011. These positive figures are especially significant in light of the negative exchange rate development of the Swiss Franc against both US dollar and Euro during the year.

u-blox strives to create long-term value for all its stakeholders. To achieve this, the company continued to adhere to a 4-pillar strategy, consistently focusing on innovation, market expansion, operational excellence and strategic partnerships.

During 2011, u-blox entered the North American CDMA market through the acquisition of San Diego based Fusion Wireless. The acquisition immediately gave the company a new, cutting-edge wireless module products plus access to the CDMA market in North America for both consumer and M2M applications. It also expands the company’s wireless module technology roadmap to cover all popular standards used worldwide.

A second acquisition of all intellectual property of Australia based SigNav, a leader and 15-year veteran in precision-timing and reference frequency technologies, enhanced u-blox’ market position in the global mobile basestation and femtocell markets which rely on this technology. Both companies where successfully integrated. With healthy liquidity of CHF 81.1 million, u-blox continues to assess additional acquisitions in order to strengthen its product portfolio and global presence.

u-blox experienced a strong year of innovation in positioning. Six new products were launched during the year targeting the in-dash automotive navigation sector, precision timing, and handheld consumer markets. A new application sector, Precise Point Positioning (PPP), was entered with a new product that addresses high-accuracy mapping and agriculture applications. Of special significance was the development and verification of new technologies and products that address additional satellite positioning technologies in addition to GPS such as the Russian GLONASS and Japanese QZSS systems. u-blox is now well positioned with products that serve the majority of deployed global positioning technologies and augmentation systems.

Innovation is the most important success factor for u-blox. During 2011 the company maintained efforts in research and development with CHF 22.1 million. Innovation was achieved in these distinct areas:

In addition to revenue growth and two acquisitions, production capacity was increased in all manufacturing places and efficiency increased with additional automation and test equipment. The company-wide culture of program and project management was expanded with new tools, allowing quicker reaction to market demands.

To address the growing market in Southern China, u-blox opened a new office in Shenzhen, the second office in China, and an office in India. Despite the extreme situation in Japan and Thailand due to the tsunami and catastrophic flooding, no significant impact on the ability to deliver to customers was experienced. This was in part due to a broad network of suppliers and subcontractors, most of who were not affected by these natural disasters.

In 2011, the company made about 80% of its total revenue from 65 customers. u-blox’ biggest customer accounted for less than 7% of revenue. u-blox was able to increase its total number of customers to over 3’500, as well as achieve global expansion into new regions and markets.

Growth of profit from operations (EBIT) 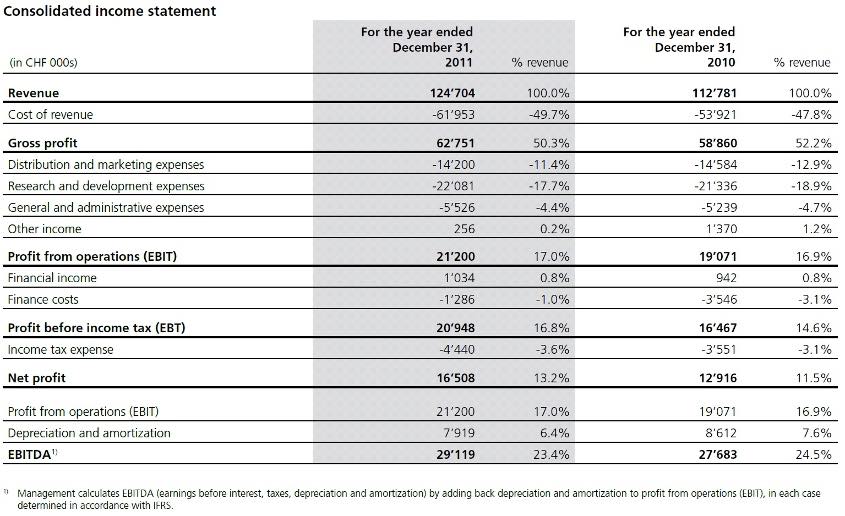 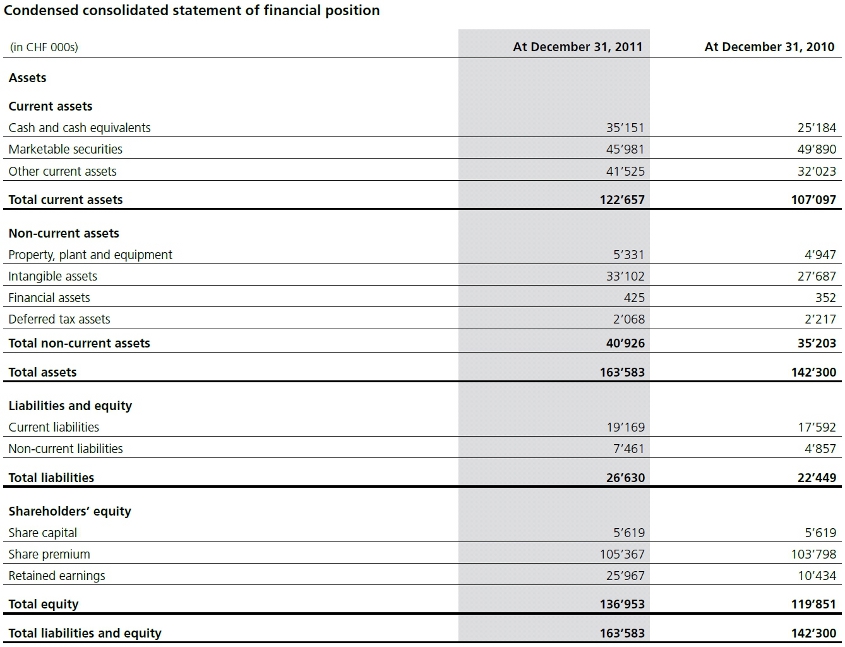 In 2011, investments in capitalized development costs were CHF 4.0 million as compared to CHF 3.4 million in 2010. CHF 3.3 million was invested in furniture, equipment, tools and test infrastructure for the further expansion of capacity and approximately CHF 2.6 million in intellectual property rights and acquired technology.

With the acquisition of the intellectual property of Australia based SigNav u-blox could enhance its market position in precision timing.

Through the acquisition in September 2011 of San Diego based Fusion Wireless Inc., u-blox strengthened its wireless module product offering and gained access to the embedded CDMA market in North America.

In 2011, there was a repayment of CHF 2.4 million of a financial liability out of acquisitions.

At the end of 2011, goodwill was at CHF 17.1 million and no impairment losses were recognized on the goodwill.

Due to this strong position and positive outlook, the Board of Directors will propose at the annual shareholders meeting to pay-out dividends. For this year a dividend of CHF 0.90 per share is suggested.

New Board and Management members

Two seasoned industry experts strengthened the top management teams; Dr. Paul Van Iseghem was elected as a Member of the Board, and Roland Jud was appointed CFO.

u-blox’ remains well positioned to serve the global markets for both positioning and wireless communications in the consumer, industrial and automotive markets. Thanks to in-house expertise in both the wireless and positioning sectors, the company is well prepared to address promising markets, including GSM, WCDMA and CDMA wireless modems for M2M markets on a global scale, as well as receivers for new satellite positioning systems in Europe, Russia and Japan. u-blox will continue to follow a dual-track strategy and foresees continued growth in 2012.

Growth drivers will be:

With over 3’500 global customers and a very strong business model and brand, u-blox expects continued revenue growth in 2012.

For the year 2012, the company maintains an EBIT guidance at approximately CHF 20 million, and its revenue guidance at CHF 155 million. This outlook is based on the absence of unforeseen economic adversity and exchange rates assumed at budget level (USD/CHF: 0.90; EUR/CHF: 1.22).

For more information, please view the Annual Report 2011 and presentation slides online at: