Thalwil, Switzerland - September 5, 2014 - u‑blox (SIX:UBXN), a global leader in wireless and positioning semiconductors and modules, today announced revenue for the first half year 2014 of CHF 121.6 million. This constitutes a 15.7% increase over the first half year of 2013. Gross profit increased to CHF 57.6 million, resulting in a gross profit margin of 47.4%. EBIT for the first half year of 2014 was CHF 18.8 million, a strong growth of 36.5%. The net profit grew 18.4% to CHF 14.4 million. u‑blox confirms its previously published guidance for the full year of revenues between CHF 264-275 million, with an EBIT in the range of CHF 35-39 million.

u‑blox acquired the Malmö based (Sweden) connectBlue AB. After the balance sheet date, the Athens based (Greece) Antcor was acquired. Both firms come with proven technologies for short range radio (Bluetooth and Wi-Fi) communications.

Financial highlights of the first half of 2014

Strong overall performance
As compared to the same period in 2013, u‑blox revenues based on billing location increased in Asia Pacific and EMEA. Asia Pacific sales experienced a strong growth of 33.1%, revenue in EMEA grew with 7.6% and the America sales were flat with -0.7% due to the decision by some US customers to outsource manufacturing to Asia. Without that effect, Americas would have grown by around 13%.

Continued growth in industrial markets
Strong performance was achieved in u‑blox’ industrial markets. The driving application continued to be fleet management systems. This was followed by good performance in industrial timing and synchronization applications which grew remarkably as compared to the first half of 2013. Telematics devices such as insurance boxes and Automatic Teller Machines/Point of Sales terminals experienced robust growth. Healthcare devices, which are included in the industrial sector, exhibited outstanding growth, becoming the company’s fastest growing industrial sector. Sales into the global automotive and consumer markets were flat.

Strategic products launched
In the first half, u‑blox launched several strategic products in both the wireless and positioning product lines that exploit cutting edge technologies. The world’s fastest LTE module, the TOBY-L2, was launched in January. It is the first LTE module on the market to deliver category 4 performance, capable of speeds up to 150 Mb/s. It also supports 3G and 2G networks, a crucial feature to allow our customers to upgrade their products already without compromising on network coverage. 4G LTE is the state-of-the-art in cellular communications, and is the fastest growing telecommunications standard in history.

On the positioning side of the business, u‑blox successfully deployed its 8th generation positioning chip technology u‑blox M8 into its industry-standard module series MAX, NEO and LEA. The modules can acquire and track all visible GPS, GLONASS, BeiDou, QZSS and SBAS satellites and can track any two satellite systems simultaneously for increased reliability, accuracy and faster acquisition time. u‑blox M8 is at the forefront of global positioning technology, and is being offered alongside the company’s previous u‑blox 7 based products in order to provide customers with both cost and performance optimized options.

The company introduced a revolutionary 3D dead reckoning chip which enables car navigation equipment to calculate a position within multi-level structures, a typical scenario when driving through stacked highways and multi-story park houses.

As a result of the connectBlue acquisition, u‑blox incorporated seven new short range radio module products conforming to the Bluetooth and Wi-Fi standards. These products support u‑blox’ strategy of providing both long-range and short-range wireless communication modules, a key requirement for providing end-to-end communication solutions in the Internet of Things.

Sales increased strongly in several of our market sectors. Highlights during the first half year include:

From the beginning of 2014 until the release of these half year results, u‑blox acquired two companies which have developed mature technologies for short range wireless communications:

These acquisitions expand u‑blox’ ability to provide wireless communication components optimized for long-range as well as short-range communications. This is a key advantage for applications in the “Internet of Things” where end devices such as sensors, meters and home appliances are often located within a few hundred meters of a cellular communications terminal or Wi-Fi router. 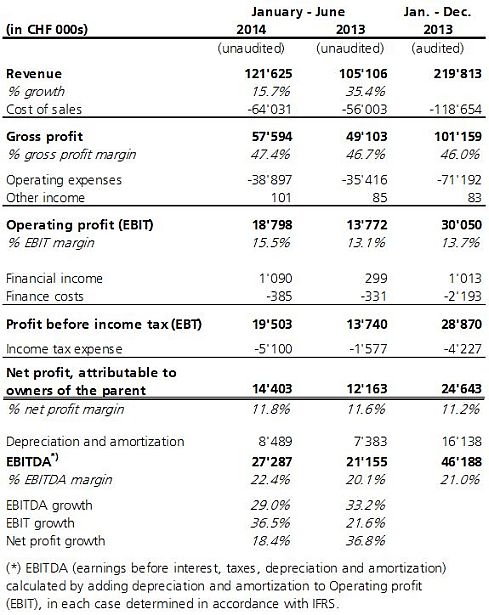 Expanded global presence
Until the release of this half year report, u‑blox expanded its global organization through the two acquisitions, gaining a center of competence for short range radio modules based in Malmö, Sweden, and a research and development center for industrial Wi-Fi based in Athens, Greece.

Outlook
u‑blox is on track to meet its previously communicated guidance with revenues between CHF 264 - 275 million with an EBIT in the range of CHF 35 - 39 million for the full year 2014. The company continues to gain traction in key markets where the “Internet of Things” is making strong inroads, particularly mobile healthcare devices, small cell communication base-stations, point-of-sales terminals and vehicle applications. Continued strong growth in all these market sectors is forecast.

The indications are based on exchange rates of 1.23 for EUR/CHF, 1.45  for GBP/CHF and 0.90 for USD/CHF.  u‑blox’ natural hedge against foreign exchange variations at the level of material costs helps maintain its relative gross margin. Revenue and EBIT, however, remain sensitive to the further variation of currency fluctuations against the Swiss Franc.