Overall growth continues
Consolidated Group revenues in 2016 showed continued growth, rising by CHF 21.9 million to CHF 360.2 million, or the equivalent of a 6.5% increase over the previous year. EBIT was up strongly by 15.0% compared with 2015 and stood at CHF 59.0 million. Nevertheless, revenue progress differed markedly from one geographical region to another.

Markets in Europe, the Middle East and Africa (EMEA) reported strong growth of 18.5%, with expansion across all areas and product ranges, especially for asset tracking and infrastructure applications. Europe, in particular, benefited from a notable upturn in demand for mobility solutions and smart metering, as well as telematics units for cars and trucks. The latter is driven by lively demand for in-vehicle connectivity and, on the automotive front, will undoubtedly profit from the upcoming mandatory eCall function in the car.

The Asian markets continued to benefit from a positive economic climate and reported a growth of 9.1%, especially in the consumer markets for wearables and personal trackers, where u-blox continued to develop new business. u-blox has also established a leading position in the region for UAVs (unmanned aerial vehicles, or drones) and continued to play a pioneering role in automotive applications for telematics and navigation. The industrial side of the operations profited from expansion in the telecoms industry.

Business in the Americas was negatively affected by events that included political uncertainty and slow business progress in the USA. Customers there delayed further investments into mobility solutions, and generally took a more prudent approach in launching new products. Despite this temporary setback, u-blox is confident that the design of several promising new products and ongoing demand for IoT solutions will see the region revert to robust growth in the months ahead.

Firmly on course towards intermediate goal
u-blox remains on course to achieve its medium-term goal of half-billion-dollar annual revenues. u-blox continuously expanded its workforce, particularly in R&D, to boost the innovation rate. The resulting capacity provided the impetus needed to create and announce a number of market leading new products.

Product highlights
One of the central reasons for u-blox’s ongoing success is the company’s ability to develop and market products that are geared precisely to the needs of specific markets. In this respect, 2016 was a milestone year: never before had the company announced so many new products. Last year’s highlights included:

Strategy
u-blox is pleased to report that it remains firmly on course with its well-established strategy, which is founded on four discrete pillars: consolidation of its market position; ongoing technological development and innovation; operational excellence and strategic partnerships. u-blox continues to grow its business with regular launches of new and more sophisticated products. These include the launch of first LTE chipset for Category 1 and the LARA-R3 module based on this chipset. u-blox also announced the NANO-S100 module for wireless applications in the unlicensed spectrum, the new u-blox 8 platform together with high-precision products for positioning, and the expansion of its short-range product line for IoT applications. u-blox works untiringly to strengthen its global presence, in the quest for operational excellence and the increased efficiency that comes with economies of scale.

On the acquisition front, in January 2017 u-blox announced an asset deal with Shanghai-based SIMCom that expands u‑blox’s existing cellular product range and makes it a major supplier of cellular modules worldwide. The asset deal is due for completion in spring 2017.

u-blox develops and sells chips and modules for positioning and wireless connectivity that are used in automotive, industrial and consumer applications. Revenue was CHF 360.1 million for 2016 as compared to CHF 338.0 million in 2015.
u-blox also offers wireless communication technology services in terms of reference designs and software. In 2016, revenue for wireless services was CHF 26.0 million compared to CHF 26.1 million in 2015 (including intra-group revenue).

In 2016 based on billing location, Asia-Pacific generated 49.5%, EMEA 25.5% and Americas 25.0% of total revenue. u-blox was able to grow revenues in Asia Pacific by 9.1% to CHF 178.4 million and EMEA by 18.5% to CHF 91.7 million. In the Americas revenue decreased by 7.4% to CHF 90.2 million due to delayed investments of customers into mobility solutions and a more prudent approach by its customers in launching new products.

In 2016, the company made about 80% of its total revenue from 71 customers. u-blox's largest customer accounted for less than 6% of revenue. u-blox served over 5’700 customers and achieved global expansion into new regions and markets.

Share based payment
The share-based payment expenses recognized in 2016 were CHF 7.0 million as compared to CHF 4.4 million in 2015.

Finance income and costs
Finance income was CHF 4.3 million. Finance costs were CH 1.7 million, mainly due to foreign exchange effects and interests for the bond.

Strong net cash generated from operating activities
In 2016, u-blox generated cash from operating activities in the amount of CHF 93.6 million as compared to CHF 74.7 million in 2015. A strong growth of 25.3% compared to previous year. Due to strict management inventory level and trade receivables decreased despite of the expansion of the business and higher revenues.

Financing activities
In 2016 u-blox paid dividends of CHF 12.9 million and received proceeds from the issuance of ordinary shares connected with the employee share option plan of CHF 3.4 million.

On the basis of this strong financial position and the positive outlook, the Board of Directors proposes at the Annual General Meeting to pay out dividends. For this year an increased dividend of CHF 2.10 per share is suggested, which represents a payout ratio of 31.1% of consolidated net profit, attributable to owners of the parent.

Challenges and risks
The risks that confront a high-technology company like u-blox in a global environment are many, and u-blox takes prudent measures to safeguard its own operations and those of its customers. First and foremost of these is the continued development and marketing of the leading products its customers can rely on to meet their precise needs, which means keeping a close eye on and predicting technological development. Secondly, u-blox is keenly aware of the repercussions of currency exchange movements and ensures as far as possible that its production and operational expense in specific currencies is commensurate with revenues. And thirdly, u-blox has an extensive and expanding base of over 5700 customers, with no single one of them accounting for more than 6% of sales.

Board and management
During the period under review, Soo Boon Koh retired from the board. Her seat was taken by Gina Domanig, who holds triple (Swiss, US and French) nationalities. Gina Domanig is Managing Partner of Emerald Technology Ventures AG, a Member of the Board with Die Mobiliar Genossenschaft, Switzerland, and Chairman of the Board at the Energy Venture Forum, Switzerland.

Outlook
u-blox plans to maintain its aim of continued profitable growth. To achieve this, u-blox needs to invest in new products and offer a wide range of chips and modules that meet the many needs of customers. These will consolidate its leading position and help to accelerate growth. As the Internet of Things continues to transform the course of the industry, u-blox is forging ahead with the development of the low-power, low-price modules required in countless applications with strong, continuously growing demand, while focusing on the three areas that cover the entire spectrum of communication needs: positioning, cellular and short range technology.

u-blox plans to launch its second bond issue in 2017. The net proceeds of the issue will increase u‑blox‘s financial flexibility, ensuring the Group's financing for the coming years. 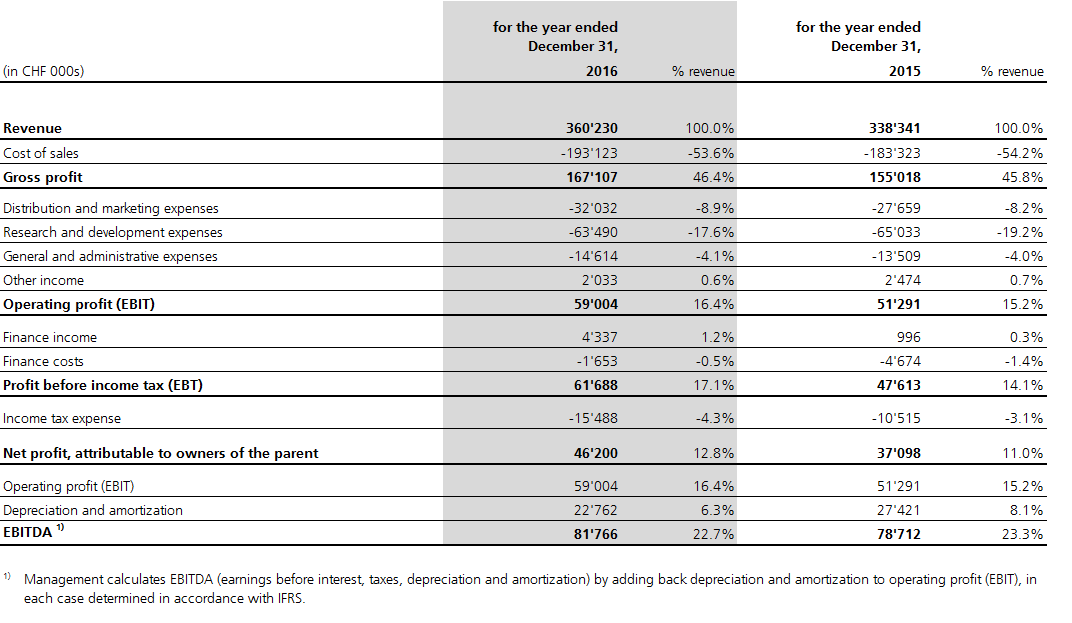 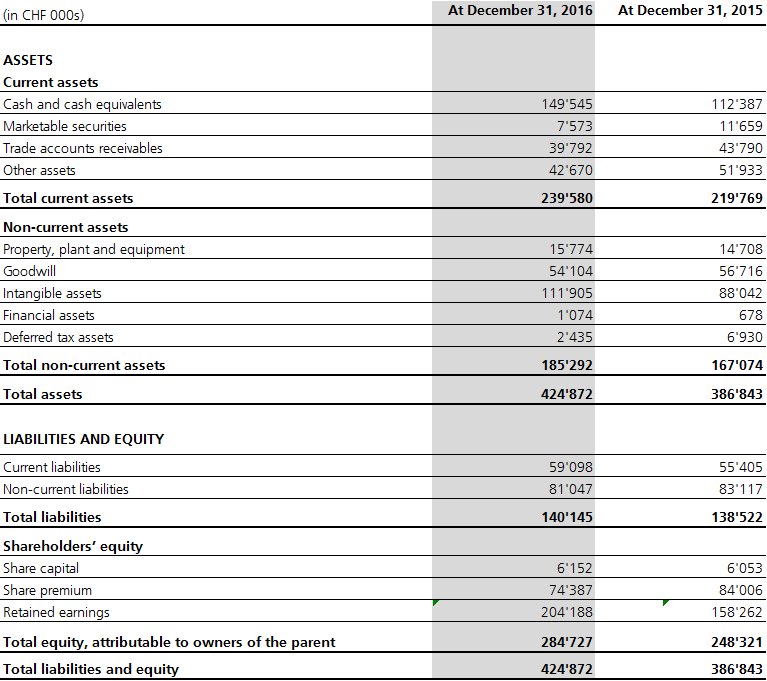 For more information, please view the Annual Report 2016 and presentation slides online at:

About u-blox
Swiss u-blox (SIX:UBXN) is a global leader in wireless and positioning modules and chips for the automotive, industrial and consumer markets. u-blox solutions enable people, vehicles and machines to locate their exact position and communicate wirelessly over cellular and short range networks. With a broad portfolio of chips, modules and software solutions, u-blox is uniquely positioned to empower OEMs to develop innovative solutions for the Internet of Things, quickly and cost-effectively. With headquarters in Thalwil, Switzerland, u-blox is globally present with offices in Europe, Asia, and the USA.
(www.u-blox.com)

Disclaimer
This release contains certain forward-looking statements. Such forward-looking statements reflect the current views of management and are subject to known and unknown risks, uncertainties and other factors that may cause actual results, performance or achievements of the u-blox Group to differ materially from those expressed or implied. These include risks related to the success of and demand for the Group’s products, the potential for the Group’s products to become obsolete, the Group’s ability to defend its intellectual property, the Group’s ability to develop and commercialize new products in a timely manner, the dynamic and competitive environment in which the Group operates, the regulatory environment, changes in currency exchange rates, the Group’s ability to generate revenues and profitability, and the Group’s ability to realize its expansion projects in a timely manner. Should one or more of these risks or uncertainties materialize, or should underlying assumptions prove incorrect, actual results may vary materially from those described in this report. u-blox is providing the information in this release as of this date and does not undertake any obligation to update any forward-looking statements contained in it as a result of new information, future events or otherwise.