Continued growth in sales and profit

In 2013, worldwide sales growth of 27.0% over 2012 was achieved. Strong growth in APAC (+68%) and very robust development in EMEA (+34%) was realized; revenues in the Americas declined by 13% because several large US customers chose to outsource manufacturing to Asia. Without this effect business generated by the US-based sales team increased by over 20%.

u‑blox’ product and service business segments both generated positive EBIT during 2013. Consolidated revenue was up by CHF 46.7 million to CHF 219.8 million with increased volumes, while EBIT increased from CHF 22.9 million to CHF 30.1 million, a 30.9% increase over the previous year. Net profit grew by 44.3% to CHF 24.6 million, representing an 11.2% net profit margin for 2013.

u‑blox’ products serve virtually all growth sectors that make up the “Internet of Things” (IoT). The company is positioned at the heart of this megatrend, able to deliver crucial chips and modules for both embedded positioning and wireless communications. With the IoT theme now firmly established, demand for the company’s products has proliferated right across its core markets.

u‑blox’ corporate strategy focuses on an ambitious goal: to reach a half-billion dollar in annual revenues, with comparable growth in EBIT, within the next few years. The company’s expansion, acquisition, manufacturing, and product strategies are all aligned to meet this target. In doing so, u‑blox intends to become the number one provider of wireless and positioning modules and chips that serve the broad range of applications supporting embedded mobility.

The company’s focus on wireless and positioning technologies that support Machine-to-Machine (M2M) communications and the IoT continues to drive innovation. u‑blox’ positioning product strategy clearly focuses on serving all five deployed satellite navigation systems, u‑blox’ wireless strategy is to support all four mobile communication standards worldwide. u‑blox continues to leverage complementary functionality between its positioning and wireless technologies, a strategy that has resulted in the “AssistNow” accelerated positioning and “CellLocate” indoor positioning services, both of which were expanded and improved during the year. u‑blox’ packaging strategy to deliver form-factor and layout compatible products across successive product generations is highly appreciated by customers and remains a key reason why they stay with u‑blox.

Finally, u‑blox’ underlying philosophy of delivering its own chip and module solutions based on in-house technology is being extended to the wireless domain. This places the company in an excellent position to participate in the extremely promising 4G LTE revolution. At the same time the company remains committed not to compete with customers, but rather focus on supporting them with outstanding components and services.

Although no acquisitions were made in 2013, previous acquisitions were further integrated into the company during the year. With healthy liquidity of CHF 60.6 million, u‑blox remains in an agile position to acquire the necessary technologies, expertise and products to maintain its market lead and further broaden its technology base.

u‑blox earned two awards for excellence during 2013; Korea’s New Media Prize for best communications product for the LISA-U2 3G wireless module, and M2M magazine’s Global Top 100 award for excellence in connectivity solutions for the 3rd year in a row.

The company continued its focus on quality and logistical excellence during a year of strong production ramp-up at our customers. u‑blox celebrated a 10-year collaboration with module partner Flextronics in Austria where production lines became fully automated. u‑blox successfully passed ISO 9001:2008 re-certification audits at its headquarters in Thalwil, Switzerland, and wireless R&D center in Sgonico, Italy.

In 2013, the company made about 80% of its total revenue from 67 customers. u‑blox’ largest customer accounted for less than 11% of revenue. u‑blox served over 4’500 customers and achieved global expansion into new regions and markets. 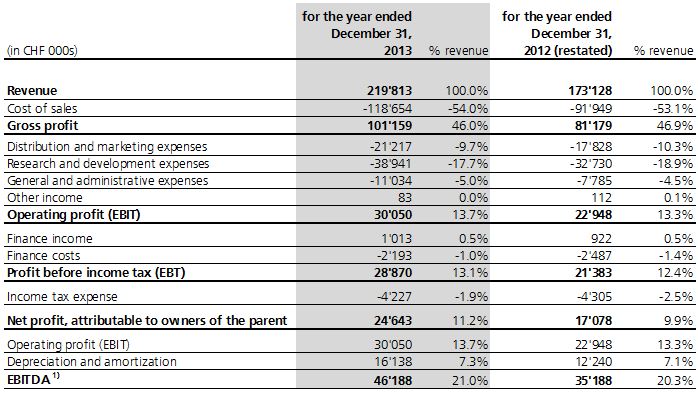 In 2013, u‑blox generated cash from operating activities in the amount of CHF 38.5 million as compared to CHF 32.1 million in 2012. Inventory level has increased due to the expansion of the business and due to higher revenue.

Main investing activities
Investments in capitalized development costs were CHF 14.9 million as compared to CHF 3.7 million in 2012. CHF 10.9 million was invested in furniture, equipment, tools and test infrastructure for the further expansion of capacity and approximately CHF 7.9 million in software intellectual property rights and acquired technology.

There was the repayment of remaining borrowings and other payables from acquisitions in 2012 of CHF 3.3 million, a dividend payment of CHF 6.4 million and proceeds from the issuance of ordinary shares connected with the employee share option plan of CHF 4.9 million.

Due to this strong financial position and the positive outlook, the Board of Directors proposes at the Annual General Meeting to pay-out dividends. For this year an increased dividend of CHF 1.30 per share is suggested which represents a payout ratio of 34.1% of consolidated net profit, attributable to owners of the parent.

Uncertainty in some European economies will continue to be an issue in 2014 and may affect some of the company’s customers. With thousands of customers spread across many market sectors all over the world, the largest customer accounting for less than 11% of revenue, u‑blox enjoys a natural protection against adverse market or regional developments. The strength of the Swiss Franc, the reporting currency, remains a disadvantage. At the relative gross margin level the company still enjoys a natural hedge against currency fluctuation as production costs are incurred in the same currencies u‑blox uses to invoice customers. A major part of u‑blox’ headcount and all production are located around the world outside of the Swiss Franc zone, either close to customers or at one of the company’s R&D centers in the UK, USA, Italy, Belgium, Ireland, Pakistan and Finland.

Strong market demand for internet connectivity and location awareness have combined to create an enormous ecosystem of products and services that serve every sector of the global economy; from supply chain management, to connected consumer devices, to mobile payment solutions, to systems for vehicle and personal safety. Combined with the 4G LTE telecoms revolution and the adoption of internet protocol version 6, the company is witnessing only the tip of the iceberg.

In the near future, countless devices will possess high-speed connectivity and access to almost limitless cloud-computing power. u‑blox’ growing portfolio of embedded chips and modules that serve all deployed cellular standards and satellite positioning systems means the company is perfectly positioned to reap the benefits of the exploding “Internet of Things”.

With its growing base of over 4’500 global customers, proven strategy, quality, brand and in-house expertise, u‑blox has laid a solid platform for continued success. For the year 2014, u‑blox gives an EBIT guidance between CHF 34 million and CHF 38 million, and a revenue guidance between CHF 255 million and CHF 265 million. This outlook is based on the absence of unforeseen economic adversity and exchange rates assumed at budget level (USD/CHF: 0.90; EUR/CHF: 1.23).

For more information, please view the Annual Report 2013 and presentation slides online at: